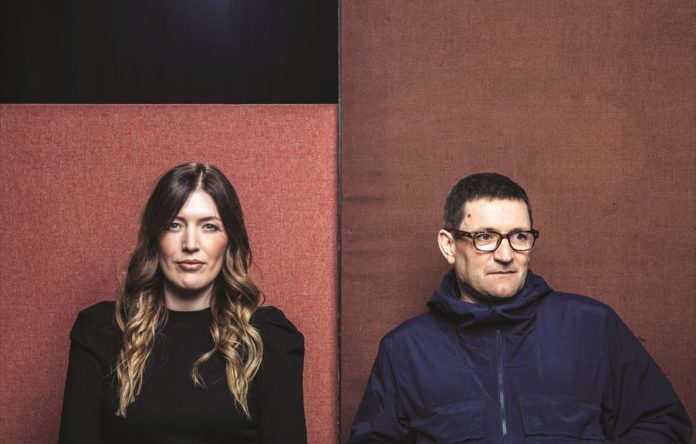 It’s been a year to remember for outdoor gigs in and around Manchester so far.

Edgeley Park has certainly played its part, not least hosting Paul Heaton and Jacqui Abbott for 2 nights last week. Performing the album The Last King of Pop which features music from The Housemartins and The Beautiful South in addition to their own songs, we were in for a treat!

The lineup included another elder statesmen of the Sheffield music scene, with support in the shape of ex-Pulp guitarist Richard Hawley. Hawley released his eighth solo album this year Further, and latest singles Off My Mind and Alone sounded great as part of a solid 9-song set.

Arguably his greatest hit Tonight the Streets Are Ours added to his usual swagger, here was the perfect remedy to warm us up nicely on a not-so-warm early summer’s evening.

When it was time for the main act,
the pair came on to rapturous applause. Kicking things off big style with Old Red Eyes Is Back, one of the perfect sing-along hits from the 90s, this was a night of perfect nostalgia.

As you would usually expect from a crowd at the home of Stockport County FC, they were more than ready to sing their hearts out – this time for a setlist of greatest hits spanning over 30 years. There were no bystanders in this crowd either, including the security staff! One of whom we caught having a dance arm-in-arm with a group of gig-goers. It’s becoming a trend around here.

Paul Heaton’s voice sounded as good as ever, particularly on Manchester and Happy Hour . Absolutely flawless. Jacqui sounded sensational leading on Rotterdam (Or Anywhere) and Don’t Marry Her. Their voices compliment each other perfectly, it’s no wonder they have chosen to keep making music together over the years. They clearly enjoyed every minute of the performance.

Paul’s wit and charm had the crowd hanging on his every word. After performing “Flag Day”, he asked everybody who had gone out and bought the Housemartins single back in 1986. Half the crowd put their hands up. “It got to number 124, put your hands down”. Big laugh.

Towards the end of the main set came an up-tempo version of A Little Time, The Beautiful South’s biggest commercial hit and only number 1 single. If you haven’t yet listened to the new album this re-invention comes as a bit of a surprise. But here, once the chorus started, it goes down very well. Who can’t resist joining in with that duet?

After 2 (two!) encores, Paul and Jacqui finished off with Song for Whoever (“I love you from the bottom of my pencil case” is still one of the greatest opening lines for a pop song) and then The Last King Of Pop.

What a joyous evening, truly a night to savour.

The Coral and The Hoosiers announced for Rochdale Feel Good Festival