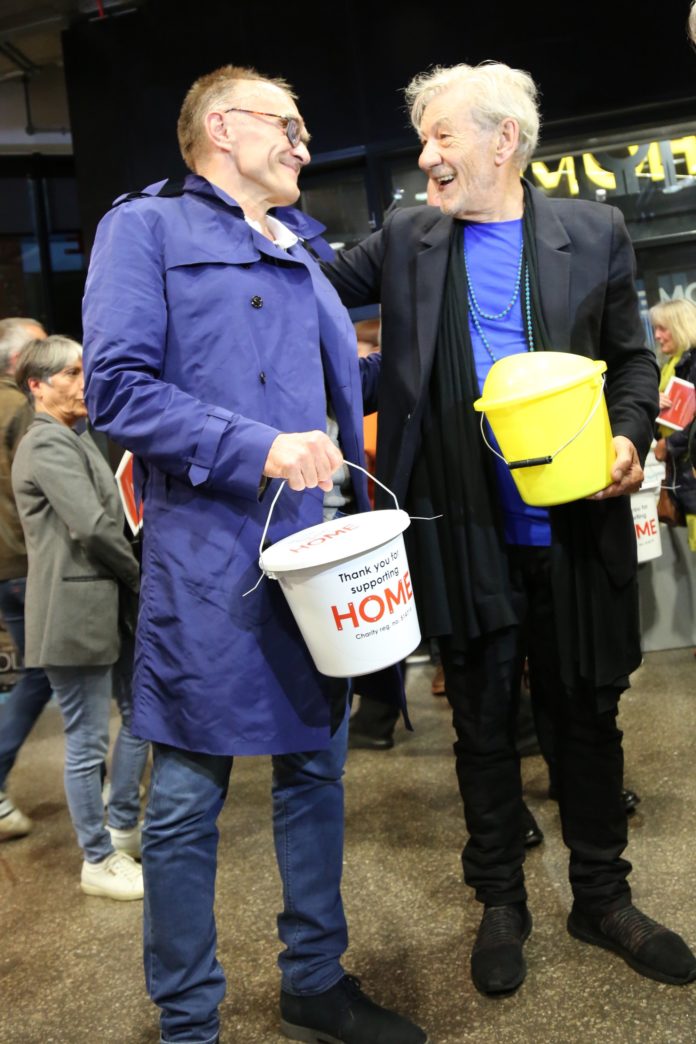 Acclaimed actor Ian McKellen made his HOME debut this week as part of a UK-wide tour to celebrate his 80th birthday. Ian delighted audiences at HOME with his performance, taking them on a journey through his life and his love affair with theatre, reciting anecdotes and performing extracts of work from his amazing 58-year career.

After the show on Thursday 6 June, he was joined by film director Danny Boyle, a Patron of HOME, to collect donations from the audience, which along with ticket sales raised over £40,000 to support HOME’s community programme, #HOMEinspires.

Dave Moutrey, Director and CEO of HOME said: “We were absolutely thrilled to be chosen by Ian as one of the 80 regional venues he would perform at on his birthday tour. We want to ensure that as many people as possible have an opportunity to take part in and experience HOME, both as audiences and as artists. The funds Ian and Danny raised will play a big part in helping us to connect with groups, charities and voluntary organisations from right across Greater Manchester.”

Ian McKellen said: “I’m celebrating my 80th birthday by touring a new solo show to theatres I know well and a few that I don’t. The show starts with Gandalf and will probably end with an invitation to act with me on stage. In-between there will be anecdotes and acting. I opened at my local arts centre in January and end up by August in Orkney. Live theatre has always been thrilling to me, as an actor and in the audience. Growing up in Lancashire, I was grateful to those companies who toured beyond London and I’ve always enjoyed repaying that debt by touring up and down the country myself, with the National Theatre, Royal Shakespeare Company, Prospect Theatre, the Actors’ Company, as well as with commercial productions. Sean Mathias, the director and I have worked together for stage and screen, many happy times.

I did my earliest theatre-going in Manchester, starting with Peter Pan at the Palace Theatre, where I much later performed an earlier solo show “Acting Shakespeare”. The new show at HOME included Shakespeare (and others) and memories of the old Library Theatre which I visited often in my youth. All profits will benefit HOME’s work with local communities through initiatives such as #HOMEinspires and will provide subsidised tickets to people who wouldn’t otherwise be able to visit HOME.”