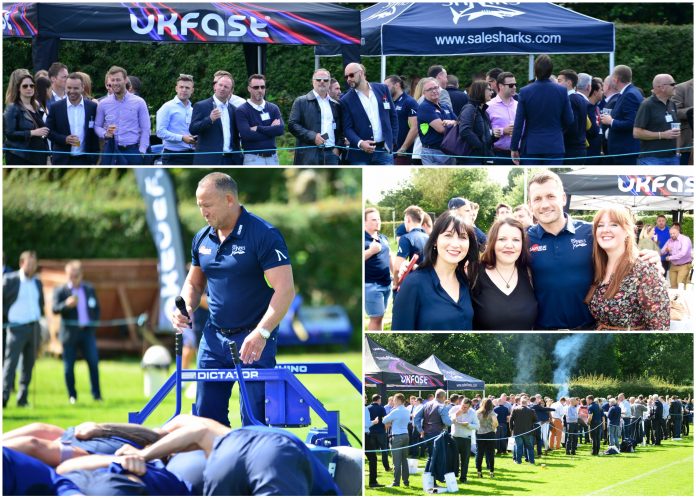 Hundreds of people will flock to Sale Sharks’ training ground in Carrington this week to watch the squad prepare for the 2017/2018 season – while enjoying barbecues and beverages.

Sponsors and partners will attend the Annual Corporate BBQ on Friday, while a Season Ticket Holders BBQ is to be held on Saturday for the first 500 fans that sign up.

The Sale Sharks 100 Club Touch Festival, in partnership with Bollington Insurance, will then take place at the same venue on Sunday.

Mark Cueto, Sale Sharks Commercial Director, said sponsors, partners and the first 500 season ticket holders that sign up will have the opportunity to watch new signings – including James O’Connor, Josh Strauss, Jono Ross – and the rest of the squad be put through their paces by Director of Rugby Steve Diamond during live training sessions on both Friday and Saturday.

Cueto, who played for Sale Sharks for 15 years as well as England and the British and Irish Lions, said: “This week is really important for Sale Sharks as a club.We are the only Premiership Rugby club in the North West, are one year into being owned by entrepreneurs Simon Orange and Ged Mason, and are always looking for ways to bring everyone associated with the club together as our ambitions grow.

“Ahead of what is a massive season, the club have made some huge signings over the summer. Events this week will provide a fantastic opportunity for sponsors, partners and season ticket holders to come along to our High Performance Centre and see how everything is coming together.”

Around 300 sponsors and partners of the club are expected to attend the Sale Sharks Annual Corporate BBQ from 2pm on Friday, July 21.

Five hundred season ticket holders are to arrive in Carrington from 11.30am on Saturday, July 22, for the training session with Steve Diamond, Mike Forshaw and Paul Deacon.

On Sunday, July 23, the Sale Sharks 100 Club Touch Festival, in Partnership with Bollington Insurance, will start at 9am.

It will see 21 under 10s and 11s teams from Cheshire and Lancashire compete in the tournament.

Bollington Insurance will give out the ‘Spirit of Rugby Award’ to the child that best displays teamwork, respect and enjoyment, and Sale Sharks’ Academy under 16s will also give a training demonstration after the touch rugby festival.

Sale Sharks’ first home game of the 2017/2018 season is against Newcastle Falcons on Friday, September 8.