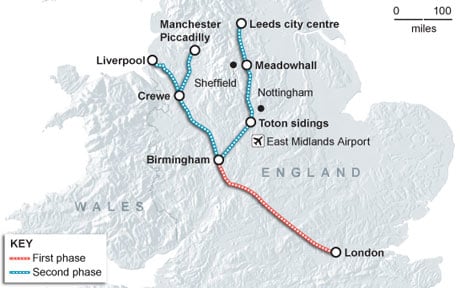 A senior Treasury Civil Servant has said that the High Speed Rail Project was little more than a Northern political project and hinted that the Treasury were against the idea.

‘Frankly, doing stuff in Northern England is politically as well as economically imperative, rather than making it easier to come from Birmingham to London. HS2 was a political decision and I think it would be inappropriate for me to reveal the Treasury advice on the issue.’

Given that the government has now cancelled electrification projects across the North of England, so that Trans-Pennine services will continue to be provided with diesel trains while pushing ahead with the high speed service between Manchester, Leeds and London, the former Labour Chancellor Alistair Darling on the same programme  slammed the scheme as a ‘waste of money’ and said it should be scrapped.

He said that the billions being pumped into the scheme would be better spent elsewhere such as boosting Britain’s northern railways.

MacPherson meanwhile remained tight-lipped about the precise advice senior civil servants gave to David Cameron’s government over pursuing the project, but hinted it was not positive.