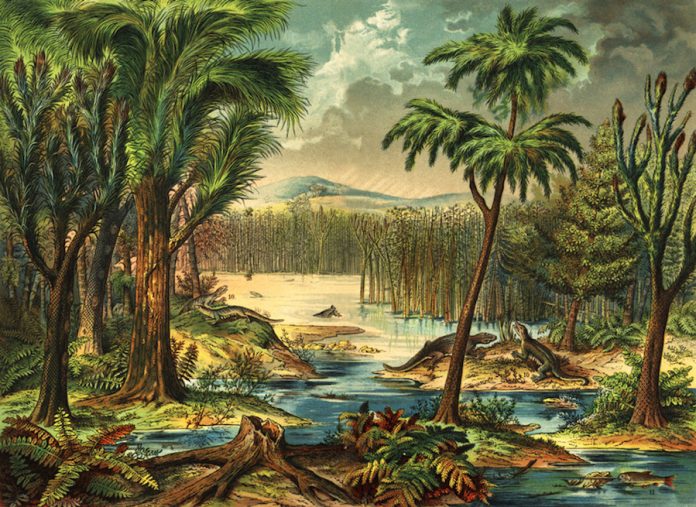 Researchers at the University of Birmingham have discovered that the mass extinction seen in plant species caused by the onset of a drier climate 307 million years ago led to extinctions of some groups of tetrapods, the first vertebrates to live on land, but allowed others to expand across the globe.

The Carboniferous and Permian periods (358 – 272 million years ago) were critical intervals in the evolution of life on land. During the Carboniferous Period North America and Europe lay in a single land mass at the equator which was covered by dense tropical rainforests. These rainforests flourished because of the warm humid climate, providing an ideal habitat for early tetrapods (vertebrates with four limbs), allowing them to diversify into a variety of species.

But towards the end of this period a major global environment change took place – just as the number of tetrapod species began to increase, the rainforests started to disappear. The climate became much drier causing the mass extinction of many species within the dominant plant groups, such as horsetails and club mosses. Despite this being a catastrophic event for plants, it has been unclear how this affected the early tetrapod community.

Previous attempts to estimate the diversity changes during this period have been hindered by the fossil record, which has not been sampled equally in different time intervals or geographic areas. To fill these gaps in the data, the Birmingham researchers compiled a new dataset from the Paleobiology Database and used advanced statistical methods to estimate diversity and biogeographic changes.

The results of the study show that tetrapod diversity decreased after the rainforest collapse and the onset of drier conditions, largely due to the reduction in suitable habitats for amphibians which needed wet environments to survive.

However they also found that after the rainforest collapse surviving tetrapod species began to disperse more freely across the globe, colonising new habitats further from the equator. Many of these survivors were early amniotes, such as early reptiles, whose generally larger size relative to early amphibians allowed them to travel longer distances, and their ability to lay eggs meant they were not confined to watery habitats.

Emma Dunne, from the University of Birmingham’s School of Geography, Earth and Environmental Sciences, said: ‘This is the most comprehensive survey ever undertaken on early tetrapod evolution, and uses many newly developed techniques for estimating diversity patterns of species from fossil records, allowing us greater insights into how early tetrapods responded to the changes in their environment.’

Dunne continued: ‘We now know that the rainforest collapse was crucial in paving the way for amniotes, the group which ultimately gave rise to modern mammals, reptiles and birds, to become the dominant group of land vertebrates during the Permian period and beyond.’

Factors To Consider Before Choosing Bookmaker In Manchester