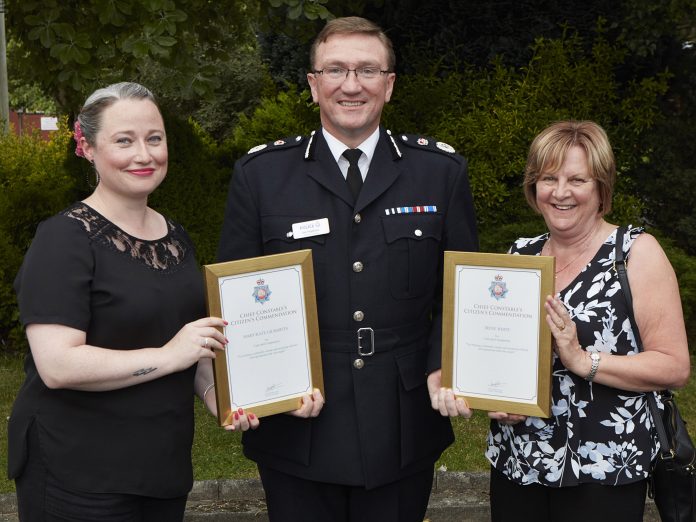 Greater Manchester Police has presented two Royal Manchester Children’s Hospital workers with an award, after they helped a woman in distress while off duty.

In February both Mary-Kate and Irene were making their way home, having finished a day’s work at the children’s hospital.

Mary-Kate Gilmartin, 36, from Higher Blackley who works as a fundraising clerk, and Irene White, 63, from Blackley, who works as a nursing assistant, were in the Piccadilly area at around 5pm when they noticed a clearly distraught young woman acting erratically.

Concerned for her wellbeing, both Mary-Kate and Irene approached the woman and quickly intervened when she stepped into the road and was narrowly missed by a number of oncoming vehicles, including a bus.

As Mary-Kate and Irene spoke to the woman in an attempt to calm her, it became clear she had been drinking. After talking to her for some time, the woman said she had been raped. As one of the hospital workers continued to talk and reassure the woman, the other quietly rang the police.

When a police officer attended the scene the woman became extremely agitated once again and wouldn’t engage with the officer at all because he was a man. At this point the lady attempted to head-butt the glass panel of a nearby bus stop, leaving the officer no choice but to restrain her for her own safety.

The officer decided that the best course of action would be to take the woman to Longsight Police Station, where she could be interviewed by a female C.I.D. officer and receive the appropriate assessment and support. The woman refused to cooperate unless both Mary-Kate and Irene accompanied them.

Without hesitation they Mary-Kate and Irene decided to help and, after travelling to the police station, they stayed with her until she had been interviewed by a female officer.

Irene said: “Both Mary-Kate and I knew we could not leave this distressed girl as she was clearly a danger to herself and for me, it was the right thing to do.

“Receiving the award came as a complete surprise and was totally unexpected. My family are very proud of me.”

Mary-Kate added: “It was an honour to receive the award and I hope it helps people realise that there are plenty of people out there who are willing to help others and not turn a blind eye. I just hope that if it was myself or any of my friends or family in that situation, that someone would help them.”

Chief Constable Ian Hopkins, who presented both Irene and Mary-Kate with their awards, said: “When most people at the end of the day just wanted to make their way home and not deal with a potential volatile situation, both Irene and Mary-Kate showed an unprecedented level of compassion in stopping and helping a vulnerable young woman who presented an imminent danger to herself.

“When the GMP officer arrived on the scene to deal with the situation, both Irene and Mary-Kate could have continued on their way, but they decided to stay.

“Their presence helped to calm the vulnerable lady and allowed officers to make the necessary enquiries and provide the appropriate care and support.”

The vulnerable female was later admitted to a psychiatric ward as a voluntary patient, where she continues to receive treatment as an outpatient.

Upon further investigation by GMP, no further action was taken into the rape allegation.