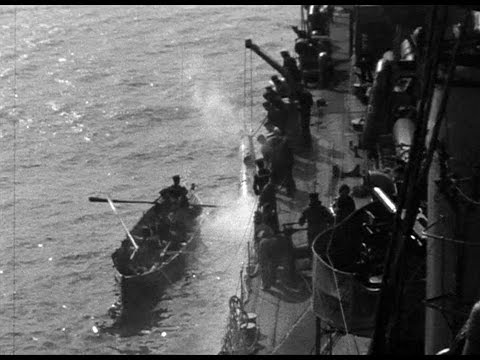 Unique and historically significant films shot 75 years ago, during the evacuation of Allied forces from Dunkirk in 1940, have been digitised by the North West Film Archive at Manchester Metropolitan University.

Seen by only a handful of people, the reels of black and white footage capture key moments during Operation Dynamo, the rescue from Dunkirk of over 300,000 British and allied troops trapped by advancing German forces.

The films were shot by Lieutenant Philip Roderick Hall who was serving aboard the destroyer HMS Whitehall, one of hundreds of naval vessels, merchant ships and small boats that took part in the rescue.

The two film reels were discovered at the University of Manchester’s John Rylands Library by a member of the Heald-Hall family. The original reels have been donated to the Imperial War Museum in London for specialist preservation.

Marion Hewitt, Director of the North West Film Archive, said: “The Archive has world-class specialist expertise and facilities for digitising archive film. We were pleased to be able to help out our colleagues at University of Manchester John Rylands Library and the Imperial War Museum Film Archive in making it possible for the public to view this historic footage.”

Kay Gladstone, Curator at the Imperial War Museum, said: “Historically the films are important because they capture key moments of Operation Dynamo. We see the camera pan across the scene of fire and smoke over Dunkirk town, with its distinctive white and striped lighthouse in the background.

The footage shows the rapid passage of arriving and departing destroyers, and one Cross-Channel ferry, assisting in the evacuation. Meanwhile a destroyer fires her rear anti-aircraft guns, and another appears so low in the water as to be sinking or aground. We also see evacuated soldiers packed onto destroyers. All the while, other troops waited patiently on the beaches for their turn to be rescued.”

Lieutenant Philip Roderick Hall shot the films while he was serving on HMS Whitehall during the evacuation from Dunkirk. There is also footage of him training as a Fleet Air Arm pilot prior to being killed in action on 14 June 1942.

One hair-raising scene shows planes attempting to land on the aircraft carrier HMS Argus during a storm. There are also scenes of Lieutenant Hall relaxing off-duty in England during the summer of 1941.