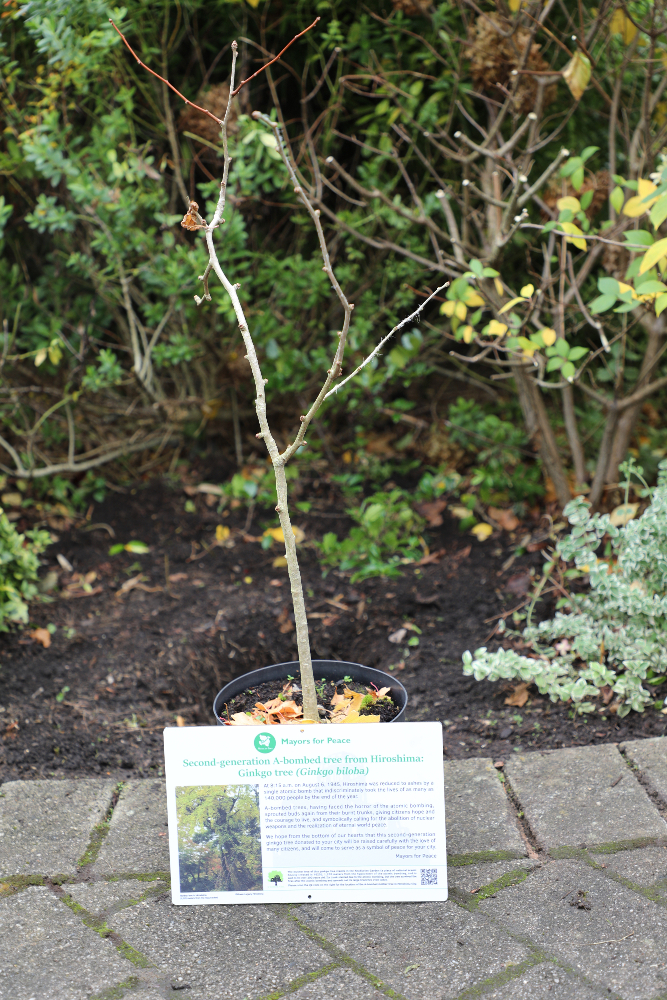 In April 2017, two survivors of the atom bombs dropped on Japan in 1945, visited Oldham and met with Oldham’s Mayor of Peace Councillor Derek Heffernan and representatives from The Oldham Pledge to Peace Forum and Saddleworth Peace Group. During their visit, they planted gingko and hackberry seeds gifted by the Mayor of the city of Hiroshima to the borough. These seeds were sourced from mother trees located less than two kilometres from the blast site which had survived against the odds and are seen as symbols of hope for the country.

For the last four and a half years, the saplings have been nurtured at Alexandra Park and are now ready for planting. Having signed the Pledge to Peace, Oldham Sixth Form College is delighted to have been presented with one of the trees.

On 12 November, a special ceremony took place to plant the sapling, next to our Peace Pole, with staff and members of the Student Executive outside the front of the Duncan Lawton Building. The tree comes with a commemorative plaque explaining its provenance and contains a QR code showing the location of the mother tree.

Suzannah Reeves, Associate Principal, is privileged to accept this gift on behalf of the college: “OSFC are extremely honoured to have been selected to receive one of the rare saplings from Hiroshima to plant on our campus. As a college community, we will continue to nurture the plant in our peace garden.”

“The Sixth Form College was one of the first educational establishments in Oldham to sign the Pledge to Peace, so I was delighted to offer the college this ginkgo sapling today as a symbol of our hope for eternal peace in our hearts, in our communities and amongst nations. I was so pleased to see that in the College’s Peace Garden it has such a fitting place to grow.”

“This sapling is very special. It was grown from seeds sourced from a tree which survived the atomic bombing of Hiroshima in August 1945. The seeds were given as a gift by the Mayor of Hiroshima, who is the President of Mayors for Peace, to Oldham as a fellow member of that international organisation. They were planted in April 2017 by Hibakusha, Japanese survivors of that same atomic bombing, at a special ceremony hosted at Alexandra Park by Oldham’s then Mayor of Peace, Councillor Derek Heffernan.”

Audenshaw’s Made by Mortals awarded £60,000 to support older people and children during the...