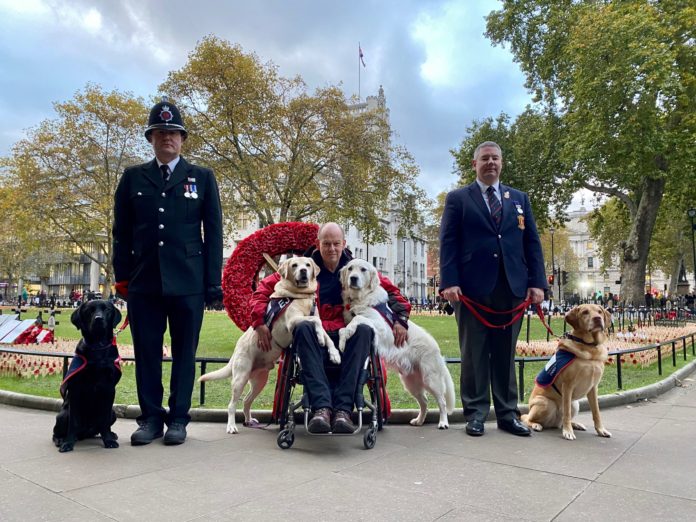 A GMP officer has paid tribute to his assistance dogs after a severe spinal injury whilst on duty left him with chronic pain.

Following multiple surgeries and intensive rehabilitation, PC Damian Malone; who has been an officer within GMP since September 2003, turned to a service dog charity for help in regaining a sense of independence and normality.

Hounds for Heroes is a registered charity set up to enable injured and disabled men and women of both the UK Armed Forces and Emergency Services to benefit from the lifeline that an assistance dog can offer.

The charity was established by Allen Parton, a former officer in the Royal Navy after he received a serious head injury. Allen’s’ recovery was a long process and as optimism of a full recovery dwindled, he was introduced to a special service dog named Endal who turned this all around.

Hounds for Heroes have been instrumental in helping Damian with his recovery, and have given him the ability to live more of an independent life than he initially expected.

PC Damian Malone, who is based at GMP Force Headquarters said: “My initial partnership with Trooper played a huge part in helping me to progressively become more mobile and active and now Gibson has taken the lead as we sadly lost Trooper to cancer in 2018.

“Amongst many other tasks, Gibson picks up dropped items, opens doors, can collect items from shelves or a bag, and can inform a friend or family member if I need them. What makes assistance dogs so special is their discipline, focus and desire to help – both physically and emotionally.”

As part of Damian’s continued support for the charity, he attended the Lord Mayor’s Show in London with his latest dog Gibson and Hounds for Heroes on Saturday 9 November 2019.

Damian took part in the procession to represent Greater Manchester Police alongside Allen, his two dogs, E.J. and Rookie, and the rest of the Hounds for Heroes team.