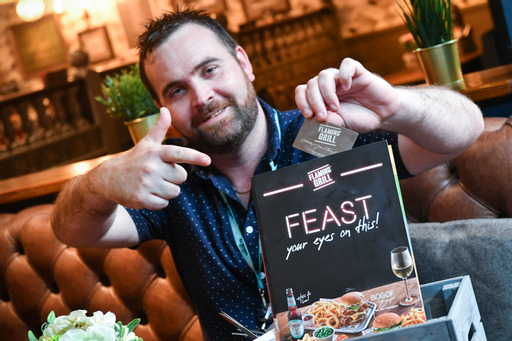 Pub brand, Flaming Grill, is celebrating its 10th birthday in style by offering one lucky customer the chance to win a whopping £1,000 worth of meals.

On the 30 August, tin cards will be hidden in menus across Flaming Grill’s 145 pubs nationwide. There’s a tin card with a £10 voucher to be found in every Flaming Grill pub but one contains the red-hot grand prize of a £1,000 to redeem at their local Flaming Grill.

Sophie Page, Marketing Manager at Flaming Grill said: “Ten years is a great milestone for any business, and at Flaming Grill we wanted to throw a celebration that ultimately gives back to our customers.

“As part of the giveaway, we’re offering 145 £10 vouchers across the UK, as well as the grand prize of a £1,000 voucher on top. If you want to be in with a chance of winning, head down to your local Flaming Grill on 30 August – the exclusive tin card will be inside for one lucky winner!”

To join in the birthday celebrations, Flaming Grill customers can also take on the ‘’steak fondue sharer challenge’ 32oz* of rump steak cooked to your liking and sliced ready to dip into a whole melted Camembert cheese, served with roasted peppers and onions, garlic ciabatta, chips and cheesy filled potato skins with pots of peppercorn sauce and beef dripping gravy for dipping. This flaming hot challenge starts from £19.49. Prices differ from pub to pub, check your nearest pub’s website.

Across Flaming Grill’s 145 pubs, one tin card will be attached to a menu at random on 30 August. Only one card will be hidden in each pub and the card must be handed in at the till within the competition period for customers to claim their prize.

The Public Spirit Announce Ready To Drink Rum Can Range

Wine Dine and Skyline at Manchester’s Hilton for just £40