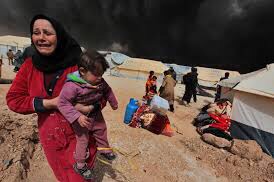 A Facebook video released by Manchester-based humanitarian aid charity, Human Appeal, that shows a Syrian refugee child in need of a pair of shoes has been viewed over a million times in its first week and reached 3.7million people.
The heart-warming video, entitled “All I want is a pair of shoes…” went live on Human Appeal’s official Facebook page on Saturday 19 February and has proven to be been a huge hit with online audiences.
The video contains real footage from the Mafraq refugee camp on Jordan’s border with war-torn Syria. In the footage, Human Appeal’s Partnership Manager, Omar Ali introduces Amaar, a barefooted 3-year-old refugee boy living in the camp. Omar tells the viewer, holding a tiny pair of blue wellington boots, that “Amaar is running around barefoot because his feet simply don’t fit into these shoes.” Omar continues, “There isn’t anyone… who has been able to give him or buy him new shoes, so hopefully this is one of the many things Human Appeal will be doing for the children this in particular camp.”
The viewer then sees Omar Ali and other Human Appeal staff arriving into the camp again, holding onto the back of a truck packed with humanitarian aid, provided by Human Appeal. As refugees queue up for the aid, Omar brings a pair of shoes to Amaar and helps him put them on. Then a visibly delighted little Amaar plays football with Omar in his new shoes, whilst Omar commentates, “Every single child and orphan in this camp we have now provided them with brand-spanking new shoes”
The 60 second video which, at the time of writing, has been viewed 1,024,334 times is Human Appeal’s second most-viewed piece of content in the charity’s history after another video of a Pakistani child called Bushara clocked over 2.3million views in July 2015.
Othman Moqbel, CEO of Human Appeal, said of the video: “When content like this becomes so popular it provides the work we do, in places like the refugee camps of Jordan, with immeasurable support. Not just in the spike of donations, but the heightened awareness and empathy for the people on the ground.” Mr Moqbel added “The challenges that the people in the refugee camps face are unimaginable, but videos like this help us come a little closer to being able to imagine their hardship.”
Mr Moqbel continued “Seeing Amaar so delighted, so liberated by something as simple as a pair of shoes could warm the coldest of hearts. It also puts into perspective that whilst many of us take footwear for granted, for the world’s neediest people, a pair of shoes is something they can only dream of. And providing shoes for people in refugee camps, not just in Jordan, but Turkey, Lebanon, Greece, around the globe, it is just a drop in the ocean when it comes to what the people in camps like Mafraq need in order to survive and live with dignity.”

Mr Moqbel explained “Human Appeal helps provide food, shelter, sanitation, medical care, income-generation, everything we can. The list of the things these people need is endless but ultimately what they need most of all is hope. Hope that there is a future for them outside of these camps, hope that there is a future for Syria once this horrific conflict is over and hope that this conflict ends in our lifetime.”

Human Appeal’s Omar Ali, who featured alongside 3-year-old Amaar in the video, said “I have travelled around the world, helping provide humanitarian support to millions of people, I have heard countless, heartbreaking stories, I have seen countless, heartbreaking events and I have met countless people gripped by desperation and need, but meeting little Amaar will always stay with me.” Mr Ali continued “It’s easy to distance yourself from the humanitarian necessity behind figures like ‘1.7million people provided with flour for bread’ or ‘60,000 people provided with winter food packages’ because they are just figures, but when you see what a difference one pair of shoes can make to one little boy, that’s when it hits home just how important humanitarian aid is to those who need it the most.”

Schoolchildren’s commercials are a breath of fresh air