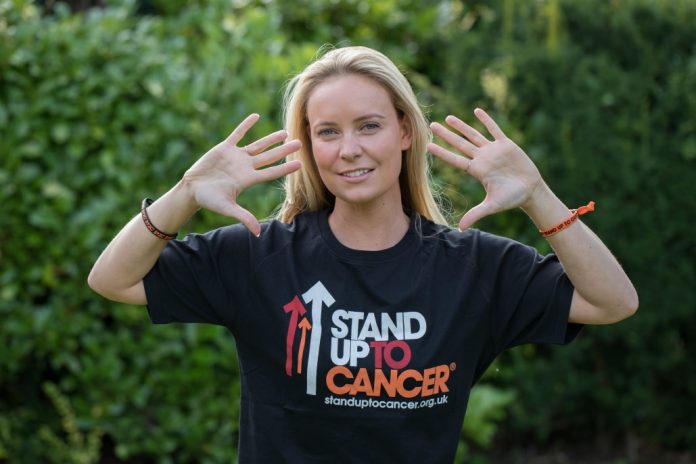 A HALE mum-of-two, who found out she had cancer in August, is rallying people in Greater Manchester and Cheshire to take part in Stand Up To Cancer.

Ruth Naylor, 32, who faces eight months of chemotherapy to treat Hodgkin Lymphoma, is urging everyone in the North West to join the rebellion against the disease this Autumn.

Stand Up To Cancer is a joint fundraising campaign from Cancer Research UK and Channel 4, which raises cash to help get game-changing new tests and treatments to cancer patients, faster.

By sharing her experience, Ruth wants to highlight the impact of research and galvanise the region to raise money to help save lives, now.

Ruth, a former banking professional, who is now a director in a specialist marketing business, was diagnosed with Hodgkin lymphoma at the end of the summer (23 August 2017), after going to the doctor with flu-like symptoms and being short of breath.

Initially she put her symptoms down to her busy lifestyle as a single mum looking after her three-year-old daughter Eva and one-year-old son Oscar while starting a new business and going to the gym regularly.

But after six weeks of the symptoms, she went to see her GP the next day and was referred for tests – a chest x-ray and a blood test – at Altrincham General Hospital and later discovered she had cancer. Her blood results came back abnormal and doctors suspected a blood clot on Ruth’s lung.

Ruth said: “I was sent to A&E for blood thinning injections but the doctors continued to investigate and brought me back into the Acute Medical unit for CT scans. They showed I have a large tumour intertwined between my lung and my heart.”

A further biopsy showed it was Hodgkin Lymphoma. Ruth has now begun eight months of chemotherapy treatment which will be followed by radiotherapy at The Christie Hospital in Manchester.

Ruth, from Hale, who grew up in Fulwood, Preston, and attended Kirkham Grammar School, said: “I just knew something wasn’t right. Even so, hearing the words ‘it’s cancer’ was the worst shock of my life. I just couldn’t believe it was happening to me. I kept thinking of my children.

“On paper I have it all. A beautiful home we built ourselves, two gorgeous children and a brilliant career but then instantly you are faced with losing everything and your perspective of everything changes.”

“I think we are obsessed portraying a perfect persona but then there’s reality and you’ve got to get out there and live.

“It’s a tough challenge but I’m up for a fight and if myself, my friends and my family can raise some awareness and funds then it would be amazing to get something positive out of this experience.

“I didn’t want to have to have the same conversation hundreds of times so I posted an update on my Instagram and the response from my friends has been unreal.

“Most of my friends and family have been angry on my behalf but I think I can’t start thinking why me, because why not me?

“One in two of us will get cancer at some stage in our lives and someone has got to be that one.”

Ruth’s family had already been touched by cancer after she lost her mum Louise to cancer in 2007 when she was just 47.

Ruth said: “Nothing positive came out of my mum’s cancer, so this time I want to actively do something.

“I know I have a rough ride ahead but I have all my friends fighting for me in my corner.

“And while I’m going through my treatment, I want to make a stand against the disease.  Research saves lives and I want everyone to know it. That’s why I’m giving my heartfelt support to Stand Up To Cancer. It raises money to speed up more effective treatments for people who really need it.”

Since it was launched in the UK in 2012, Stand Up To Cancer has raised over £38 million to fund over 40 clinical trials and research projects.

These include the development of the ‘chemo package’ to deliver treatment at the best time for the patient; testing arsenic as a weapon to make cancer implode and using viruses to seek and destroy cancer cells.

Alison Barbuti, Cancer Research UK spokesperson for the Greater Manchester, said: “We’re really grateful to Ruth for her determination to help others by recruiting people to the cause.

“Every day, around 110 people are diagnosed with cancer in the North West*.  And day after day, dedicated doctors, nurses and scientists work tirelessly to beat the disease. We’re on the brink of a revolution in cancer research but we can’t afford to stand still. It’s time to rebel against cancer, raise cash and save lives.

“By raising money for game-changing research, Stand Up To Cancer will support this progress and help change the outlook for more people with the disease.”

She continued: “There are lots of fun ways to join the rebellion against cancer. You can get creative in the kitchen like our Manchester scientists who recently held a bake sale, get sponsored to stand out in orange at work or school, do a sponsored wax or head shave or get sponsored to take part in ‘Game On’, Stand Up To Cancer’s gaming marathon. A free fundraising pack is available, full of fun and creative ways to conjure up cash.”

Stand Up To Cancer is supported by a host of celebrities from TV, film and radio including Davina McCall, Alan Carr, Bill Bailey, Edith Bowman and Kirstie Allsopp.

This autumn Channel 4 will once again bring the brightest stars from show business together in a dedicated season of Stand Up To Cancer programming.