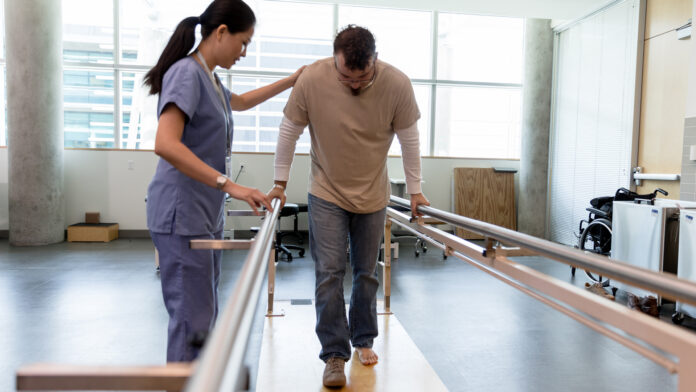 Delayed calls to 999 due to concerns around Covid-19, unavailable treatments and cancelled rehabilitation therapies caused by the pandemic has left tens of thousands of stroke survivors with avoidable, unnecessary disability, exacerbated mental health problems and has taken a devastating toll on stroke survivors and their families.

The Stroke Association today calls for immediate actions from governments and local health systems across the UK to stem a ‘rising tide’ of demand on the NHS and UK health services that could ‘take years to solve’ if left unchecked.

With enough physio, occupational and speech and language therapies and mental health support, stroke survivors can recover, but only if governments and local health systems act now, according to the first report into the effects of Covid-19 on stroke survivors by the charity.

There are 1.2 million stroke survivors living in the UK and over 100,000 strokes every year, making stroke the leading cause of adult disability. The Stroke Association estimates that there are over 35,000 stroke survivors who had a stroke during the pandemic and who require more support.

Although NHS stroke services remained open throughout, the charity’s new ‘Stroke recoveries at risk’ report shows that stroke care is on the precipice of a national crisis and risks thousands of stroke survivors’ hard earned recoveries slipping backwards.

As outlined in the Stroke Association’s Lived Experience of Stroke report last year,the level of care, rehabilitation and mental health support available was already letting down thousands of stroke survivors, unable to cope with even the pre-pandemic levels of demand.

When health and care systems begin returning services to normal, therapy waiting lists will be swamped with a backlog of thousands of stroke survivors. The charity’s report shows that there is unmet need and calls on stroke teams to follow up with stroke survivors who had a stroke this year. This is in order to get everyone in line to receive the support they need and avoid people being lost or abandoned by the system.

Juliet Bouverie, Chief Executive of the Stroke Association says: “Strokes didn’t stop because of the pandemic. Despite the tireless efforts of frontline clinicians who have gone to herculean efforts to maintain services under extremely difficult conditions, some treatments still became unavailable and most stroke aftercare ground to a halt. This means more stroke survivors are now living with avoidable, unnecessary disability. Stroke is a brain attack that affects 100,000 people a year – killing thousands and leaving others with complex and severe disability. Recovery is tough, but with the right specialist support and a ton of courage and determination, the brain can adapt after stroke.

“People under-estimate the trauma associated with the sudden life-changing experience of having a stroke. The degree of support that stroke survivors need to reframe and adjust to a new normal, often needing to cope with lifelong disability, is a lot more than people realise. We need to see increased access to mental health support, so stroke survivors can cope with their mental health issues, made worse by lockdown and ongoing uncertainty.”

Routes to school should be free of junk food outlets