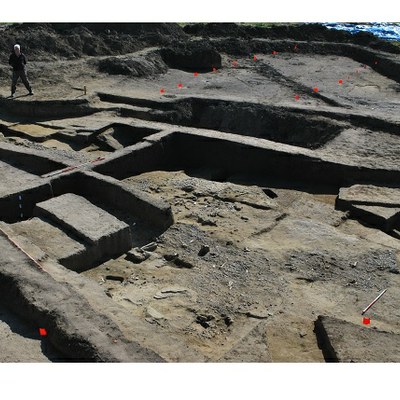 New research from experts at the University of Leicester suggests that the first landing of Julius Caesar’s fleet in Britain took place in 54BC at Pegwell Bay on the Isle of Thanet, Kent

Based on new evidence, the team suggests that the first landing of Julius Caesar’s fleet in Britain took place in 54BC at Pegwell Bay on the Isle of Thanet, the north—east point of Kent.

This location matches Caesar’s own account of his landing in 54 BC, with three clues about the topography of the landing site being consistent with him having landed in Pegwell Bay: its visibility from the sea, the existence of a large open bay, and the presence of higher ground nearby.

The project, which is funded by the Leverhulme Trust, was prompted by the discovery of a large defensive ditch in archaeological excavations before a new road was built. The shape of the ditch at Ebbsfleet, a hamlet in Thanet, is very similar to some of the Roman defences at Alésia in France, where the decisive battle in the Gallic War took place in 52 BC.

The size, shape, date of the defences at Ebbsfleet and the presence of iron weapons including a Roman pilum (javelin) all suggest that the site at Ebbsfleet was once a Roman base of 1st century BC date.

The archaeological team suggest the site may be up to 20 hectares in size and it is thought that the main purpose of the fort was to protect the ships of Caesar’s fleet that had been drawn up on to the nearby beach.

Dr Andrew Fitzpatrick, Research Associate from the University of Leicester’s School of Archaeology and Ancient History said: “The site at Ebbsfleet lies on a peninsular that projects from the south-eastern tip of the Isle of Thanet. Thanet has never been considered as a possible landing site before because it was separated from the mainland until the Middle Ages.

“However, it is not known how big the Channel that separated it from the mainland (the Wantsum Channel) was. The Wantsum Channel was clearly not a significant barrier to people of Thanet during the Iron Age and it certainly would not have been a major challenge to the engineering capabilities of the Roman army.”

The team also suggests that Caesar’s impact in Briton had long-standing effects which were seen almost 100 years later during Claudius’s invasion of Briton.

Professor Colin Haselgrove, the principal investigator for the project from the University of Leicester, explained: “It seems likely that the treaties set up by Caesar formed the basis for alliances between Rome and British royal families. This eventually resulted in the leading rulers of south-east England becoming client kings of Rome. Almost 100 years after Caesar, in AD 43 the emperor Claudius invaded Britain. The conquest of south-east England seems to have been rapid, probably because the kings in this region were already allied to Rome.

“This was the beginning of the permanent Roman occupation of Britain, which included Wales and some of Scotland, and lasted for almost 400 years, suggesting that Claudius later exploited Caesar’s legacy.”

The findings will be explored further as part of the BBC Four’s Digging For Britain. The East episode, in which the Ebbsfleet site appears, will be the second programme in the series, and will be broadcast on Wednesday 29 November 2017 at 9:00PM.