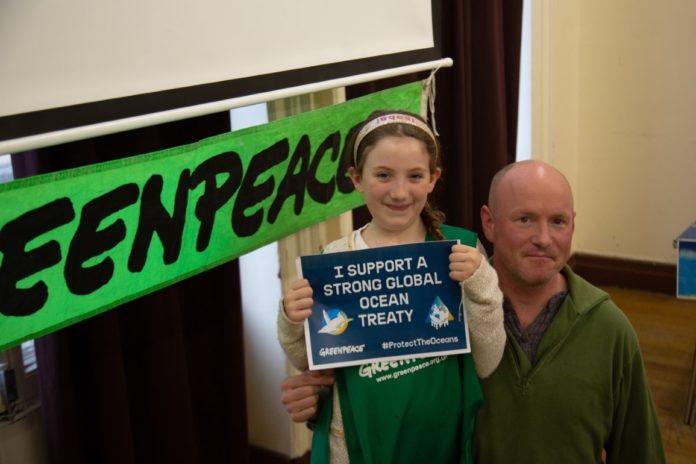 The Greenpeace ship Esperanza has spent the last eight months, since leaving London in April 2019, visiting some of the most beautiful, and vulnerable parts of the world’s seas.

The ship has visited the Lost City, an area of volcanic vents in the middle of the Atlantic, which could be where life on earth started, and the Sargasso Sea, where the unique seaweed ecosystem is threatened by plastic pollution.

The ship is now on its way to the Antarctic after visiting the recently discovered Amazon Reef, which Greenpeace saved from oil exploration.

Greenpeace volunteer Helen from Wigan was part of the team that showed visitors around the Esperanza before she sailed.

She said of the event ‘We’ve put on this exhibition ahead of the final UN negotiations in March on a Global Ocean Treaty to show the risks that iconic wildlife such as penguins face from overfishing, melting ice and plastic pollution. It’s vital that we protect at least 30% of our oceans by 2030.’

Our oceans are the biggest carbon sink on earth, and therefore they are our best ally in the fight against climate change, but currently, less than 5% of the world’s oceans are protected.

About forty people attended the Greenpeace exhibition at the Central Methodist Buildings on Saturday 18th January, which was World Penguin Day, where they viewed pictures taken on the Esperanza’s voyage, experienced a virtual reality 3D simulation of the Antarctic ocean with actor Javier Bardem.

The audience also heard a talk about the Greenpeace campaign.

Helen continued ‘Just as the Ship Canal connects Manchester to the sea, we are all connected to the ocean ecosystem. As an island nation, we know how important our oceans are for food, tourism, and to protect us from the climate emergency.’

Toxic ‘forever chemicals’ found in otters across England and Wales