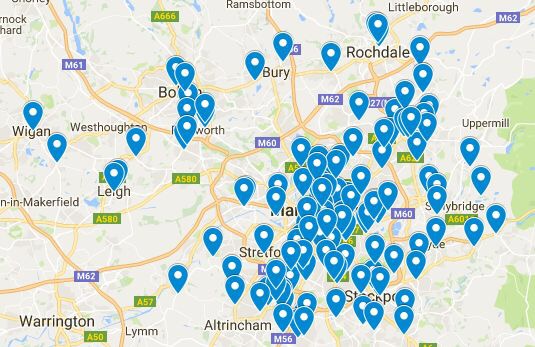 The most well-known food bank service, The Trussell Trust now has 54 distribution points in Greater Manchester but there are many more emergency food providers including churches, community centres, charities, and local action groups.

In Greater Manchester, GMPA has mapped 136.

Thirteen years ago, there were almost no food banks in the UK. They already existed in many European countries but from 2004 they began to be established in the UK.

The financial crisis and austerity measures since have seen them become a part of our landscape. There are now an estimated 2,500 places in the UK where those in need can collect a food parcel.
“Let’s be clear – you don’t go to a food bank for fun, you don’t go so you can save your money to spend on something else.” says Tom Skinner, a Director of GMPA “You go because you have no choice if you want to feed your family or yourself.”
The volunteers and staff who run foodbanks aim to make the experience of visiting one as straightforward as possible. The visitors are often offered a cup of tea, sometimes even a light meal while they wait, as food parcels are tailored to each family’s needs and their cooking facilities. Many food banks also offer debt advice, help with job applications and benefit assistance.
Many of the people using food banks are in work but are not able to earn enough to cover all their bills. A recent study showed that a couple earning the National Living wage of £7.20 per hour, i.e. not the real, recommended Living Wage which is £8.45, can no longer afford to give their children ‘food, clothing, heating, as well as modest items required for social participation.’

The report concluded that ‘pressure on family budgets is intensifying for low-income families, with childcare and housing costs increasingly the deciding factor in whether parents can achieve what the public regards as a minimum standard of living.’

Tom added “Will we ever again be a country without need for food banks? There are so many people going hungry right now, sadly it’s hard to imagine. But we have to try. In the meantime, we’ll make sure people know where they can go if they are in need.”