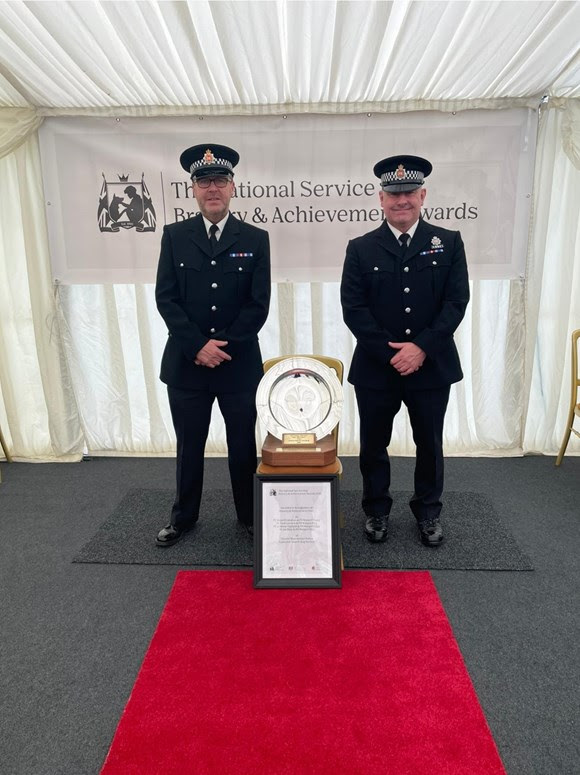 PC Ian Dale with PD Milo, PC Paul Lowden with PD Meg, PC Andrew Hayfield PD with Ziggy and retired PC Sean O’Callaghan PD with Poppy, were the team on shift at the time of the attack on 22 May 2017. The officers entered the arena with the police dogs to search for any further explosives in that might be in the building, and help ensure the scene was safe. This took enormous courage, as it was uncertain where further bombs were planted and would go off.

PC Ian Dale and PC Paul Lowden received the trophy on behalf of the team at a ceremony in Essex.

PC Ian Dale said: “It was such an honour to receive this award on behalf of the team.

“It was a difficult night for all involved, and I am just thankful that we were able to do our part to help. To be recognised for that and the work the dogs have done is a privilege, however we will never forget those who have been effected by the events of that night.”

Superintendent John-Paul Ruffle, from GMP’s Specialist Operations Branch, said: “This is an outstanding achievement for the team and we are very proud of them. This is a fitting tribute to the difficult work they had to undertake that night in what was unbelievable circumstances

“The trophy will now take pride of place in Specialist Operations Command Hub as a symbol of their heroic efforts that night, but also to act as a reminder to keep those effected in our thoughts.”

“Our mum never gave up on smiling and being happy. Our house was full...

Long service award for staff member at Manchester based care home who says “this...