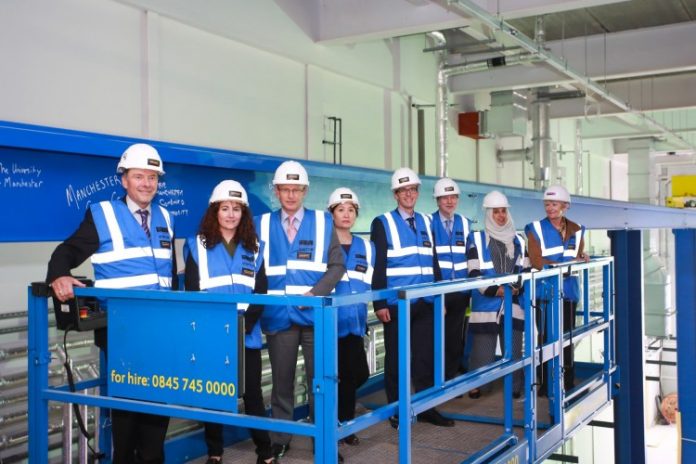 Set to open its doors next year the new £60m Centre will accelerate the commercial pace of graphene and two-dimensional materials in Manchester.

A special event today marked the ‘topping out’ of the newest building in the University’s Campus Masterplan. The Graphene Engineering Innovation Centre (GEIC) will see industry-led development of graphene and 2-dimensional materials applications in collaboration with world-leading academics at the University.

The new flagship facility has been funded by Masdar in Abu Dhabi, HEFCE, the European Regional Development Fund, the Greater Manchester Combined Authority and Innovate UK.

The GEIC will focus on pilot production and characterisation, together with application development in composites, energy, solution formulations and coatings, electronics, and membranes.

Professor Dame Nancy Rothwell, President and Vice-Chancellor of The University of Manchester said at the event: “We are grateful to all of the funders for their investment into what promises to be an incredible asset.

“This building, and the work which will take place within it, will give us a huge number and range of opportunities.”

The GEIC will complement the existing National Graphene Institute (NGI) to create a critical mass of graphene expertise made up of scientists, engineers, innovators and industrialists. The GEIC will also stimulate the commercial development of the University’s North Campus, creating a cornerstone for Graphene City.

Professor Luke Georghiou, Deputy President and Deputy Vice-Chancellor of The University, also speaking at the event, described the GEIC project as a significant step for the area: “We see the GEIC as a first step to realising a transformation of our wider surroundings.

“Manchester was known around the globe as Cottonopolis at the height of the Industrial Revolution, in this century our aim is to be Graphene City – a district where 2-dimensional materials and complementary technologies drive jobs and growth.”

Dr Nawal Al-Hosany, Deputy Director General of the Emirates Diplomatic Academy and Director of the Zayed Future Energy Prize, revealed during the ceremony that the building which houses the GEIC will be named The Masdar Building and said: “Masdar and the Emirate of Abu Dhabi in the United Arab Emirates are proud to be closely involved in the journey of scientific discovery that began with the isolation of graphene more than a decade ago.”

The GEIC building, designed by world-renowned architect Rafael Vinoly, is 8,400 square metres in size and located on The University of Manchester’s North Campus. It will house pilot production facilities and conduct research into other advanced materials.

The project has been made possible by support from around the world. David Sweeney, Director of Research and Knowledge Exchange for HEFCE and Executive Chair Designate for Research England said: “The UKRPIF scheme supports inward investment in UK Research & Development and we are delighted to work with the brilliant people at Manchester so that graphene fosters new jobs and products which support our economic growth.”

Sir Richard Leese, Greater Manchester’s Deputy Mayor and lead for business and economy commented on the GEIC: “This centre will accelerate graphene’s transition from the laboratory to factories and business parks, creating jobs and driving economic growth. Manchester has an incredible record of innovation and is a leading centre for the development of advanced materials – graphene fits right in and is a key part of the next evolutionary phase in our history.”

Greater Manchester’s lead for investment and finance, Cllr Kieran Quinn, commented: “From its conception, graphene captured the imagination of the world and its huge potential was evident for all to see. Through this facility, that potential is now set to become reality for Greater Manchester’s engineers and innovators.”

VenueScanner launches in Manchester with over 500 local venues