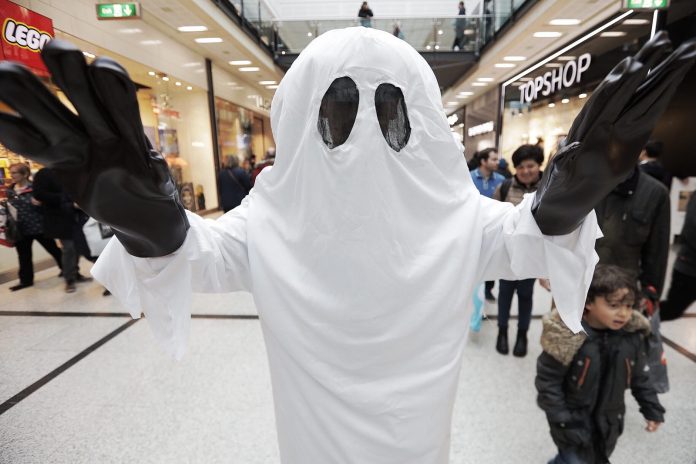 Families are being encouraged to be ghosts with the most this Halloween by taking part in Manchester’s Ghostly World Record Attempt.

Part of two-day festival Halloween in the City, the world record attempt is being hosted by Heart North West’s Joel & Lorna on Saturday 27 October at 1pm in the city’s Exchange Square.

Raising money for Big Change to help homelessness in Manchester, families are being encouraged to come down with a bedsheet – the simplest Halloween costume there is – and break the world record for the most ghosts in one place ever! Festival organisers, Manchester BID, are aiming to beat the current record of 650 by bringing hundreds of bedsheet wearing Mancunians to Exchange Square for five minutes and create the spookiest group photo op Manchester has ever seen!

The record attempt will officially take 5 minutes from the announcement and all families need to do is remain in the area for the full five minutes – the duration of the Ray Parker classic song Ghostbusters – where they’ll be encouraged to sing a long to this and a whole host of spooky tunes!

All ghosts must pre-register to take part https://www.eventbrite.co.uk/e/a-ghostly-world-record-attempt-at-halloween-in-the-city-2018-tickets-50126023285) and donations for Big Change to help homelessness in Manchester are encouraged. £2 per ghost could raise £1500 for rough sleepers and homeless in Manchester ahead of winter but participants can give as little or as much as they can.

There’ll be prizes and ghostly giveaways before the Ghostly World Record Attempt and a free family-friendly dance party around the main stage afterwards.

Halloween in the City is a two-day festival marking the arrival of Halloween, featuring momentous monsters, petrifying parades, a trick or treat trail, a spooky pooch costume show and a whole host of terrifyingly good (and free) events for all the family on Saturday 27 & Sunday 28 October 2018.

Headlining 2018’s event will be a collection of eight mind-bending inflatable giant monsters courtesy of artists Filthy Luker and Pedro Estrellas. Building on their show-stopping giant tentacles installation at 2017’s event, Filthy Luker and Pedro Estrellas are back and with a brand-new entourage of inflatable monstrosities and outlandish beasties specially created to take over the city’s rooftops and landmark buildings, including Manchester Arndale, House of Fraser, Manchester Hall, Mayfield, Piccadilly Place and 35 Dale Street.

Families can get into the spirit of things with a whole host of free activities throughout the weekend including a Trick or Treat Trail around the city centre, an Enchanted Forest featuring a Room on the Broom Zone by family theatre specialists Z-arts, ahead of their Julia Donaldson and Axel Scheffler exhibition coming in February, where children can meet the witch from the popular children’s book, plus wand and potion making at the Magic School and a Pumpkin Patch Sensory Play Zone for under-5s – all located in St Ann’s Square.

Over at the main stage in Exchange Square, where the Ghostly World Record Attempt is taking place, there’s a packed line-up of spooky specials courtesy of CBeebies and CBBC including showings of CBeebies favourites Hey Duggee, Sarah & Duck, Go Jetters and School of Roars and CBBC’s Creeped Out, Scream Street, Zig & Zag and a premiere of the new Danger Mouse Halloween special.

For more information on Halloween in the City including a full list of events and timings visit HalloweenMCR.com or follow@halloweenMCRand like/halloweenMCRfor event updates.