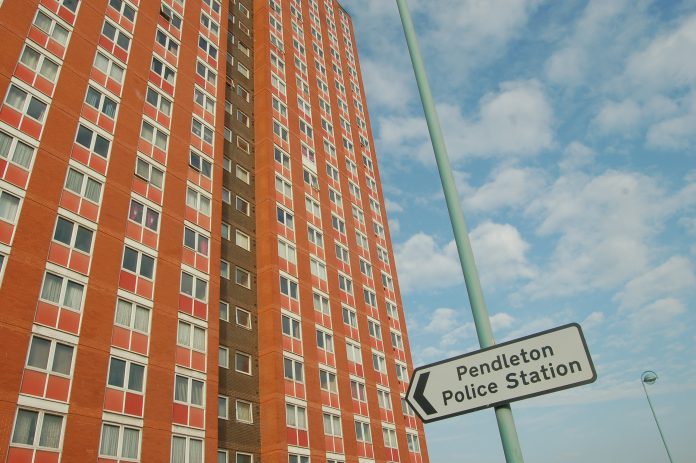 The council made a commitment in August 2017 to lend up to £25m to Pendleton Together Operating Limited, the PFI company responsible for the tower blocks, to replace the cladding system.

The council approved a lending facility in March 2018 as the best way to get the ACM cladding system replaced; pledging to provide funds after a new cladding system was independently tested and residents were consulted on the proposed works. The funding stream would have allowed a detailed work programme to be designed and contracted. The Government however has refused us permission to lend the money.

Deputy City Mayor Councillor John Merry said: “The government has repeatedly turned down our pleas for financial support in the wake of the Grenfell Fire, telling the council that we were responsible for funding the works to make the building safe. We have now been told in the last week that the council can’t lend the funds to start the work. This is beyond belief.

“It’s hugely disappointing and doesn’t benefit the public purse in any way as the money would have been repaid to the council. The government is seemingly more concerned about setting precedent for other PFI schemes than it is about the safety of residents. This is despite the awful events at Grenfell.

“We thought that Ministers would use their influence to reach a positive outcome, as these discussions over the summer have already prevented the work programme getting on site.

“I will be writing to the Government to ask them to reconsider their decisions. The Government minister who signed off on this should be ashamed, not only for betraying the people of Salford, but also for undermining the words of the prime minister who promised to tackle the issues relating to cladding.

“At the same time the government has confirmed that the PFI company itself cannot qualify for the national £400 million government funding pot, like housing associations. The only choice left is for them to raise money privately to do the works. The council can’t step-in and end the contract without significant delays and further financial penalties. We’re trapped in a bureaucratic fog of how regulations are now being interpreted.

“This is inevitably threatening to slow down the works further, which is something from the start we wanted to avoid. The safety of local people has always been our priority since the tragedy of Grenfell exposed fire safety issues.”

The council is now working closely with the Pendleton Together Operating Limited to confirm a new timetable for when the remaining works will start.

In the meantime works to Plane Court will continue and fire safety measures will remain in place on all blocks, including the 24/7 fire marshalls.