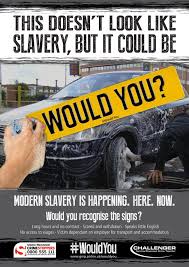 That is the findings in a report published today by Her Majesty’s Inspectorate of Constabulary and Fire & Rescue Services (HMICFRS).

The report concluded that there were signs of progress in the policing response to modern slavery. However in too many cases, police work was reactive and showed little understanding of the nature and scale of modern slavery and human trafficking.

This thematic inspection is the first since the introduction of the Modern Slavery Act in 2015. As such, it will act as a benchmark for future inspections of this issue says the Inspectorate.

Shortcomings by police forces in addressing modern slavery also included variable commitment amongst police leaders to tackling this area of offending while attitudes remained that modern slavery and human trafficking offences were rare and not an issue in their areas.

The report also found that victims were not always recognised as such and therefore remained in the hands of those exploiting them or were arrested as offenders or illegal immigrants.

The report highlighted that modern slavery and human trafficking take many forms, but all of them involve coercion and result in the erosion of individual choice and freedom.

Victims may be forced into work, sex, domestic servitude or other forms of exploitation, suffering inhumane and degrading treatment for long periods of time. They are often subjected to threats or violence, which may also extend to those close to them.

“In the UK, today and every day, thousands of men, women and children who are victims of modern slavery and human trafficking are being degraded and dehumanised. The police have a crucial role to play in protecting these people and preventing offenders from exploiting others.

“Whilst modern slavery cases can be complex and require significant manpower, many of the shortcomings in investigating these cases reflect deficiencies in basic policing practice. We found inconsistent, even ineffective, identification of victims and investigations closed prematurely. As a result, victims were being left unprotected, leaving perpetrators free to continue to exploit people as commodities.

“We did see some good work in the course of our inspection, notably in forces such as Greater Manchester Police, West Yorkshire and Cumbria, which demonstrates the results that commitment and dedication in dealing with this kind of crime can achieve. We also found committed individuals and teams working hard to raise the profile of this type of offence, and to protect victims who are often extremely vulnerable in multiple ways. These officers and staff should be commended.

“Since our inspection at the start of this year, forces have already begun to act to improve their service to victims of modern slavery and human trafficking. When we return to re-inspect, we will report on policing’s progress against this benchmark inspection. I hope to see real and consistent improvement.”

GMP takes the investigation of sexual offences extremely seriously. We have specially trained detectives who work with victims to investigate allegations. We work in partnership with, and provide financial support to St Mary’s, the best sexual assault referral centre in the country. We also work at a City and Borough level with Independent Sexual Violence Advisors. This is all designed to provide the best possible support to victims of sexual violence.

Policing has changed dramatically over the past seven years. We have responded to the challenges of having 2000 fewer officers and to the changing nature of crime with a very clear plan for the future of policing in Greater Manchester. This commits us to working in a much more integrated way with partners, which is in line with the Greater Manchester public service reform principals. It also means placing as many officers and staff at a local and Borough level as possible and only centralising capability where it is so specialist it is not cost effective to provide it any other way.

We have moved specialist detectives to a Borough level, in line with our operating model, to work much more closely with those partners who also provide significant support to victims. The same specially trained detectives will be investigating sexual violence at a Borough level. We have strengthened the governance around these investigations by dedicating four Detective Superintendents across the Force to take responsibility for those detectives and the investigations in support of local policing.

The reality is that there has been no central team investigating sexual violence for seven months. To clarify, this has not reduced the number of officers investigating serious sexual offences it has merely moved their experience to help across the force area.