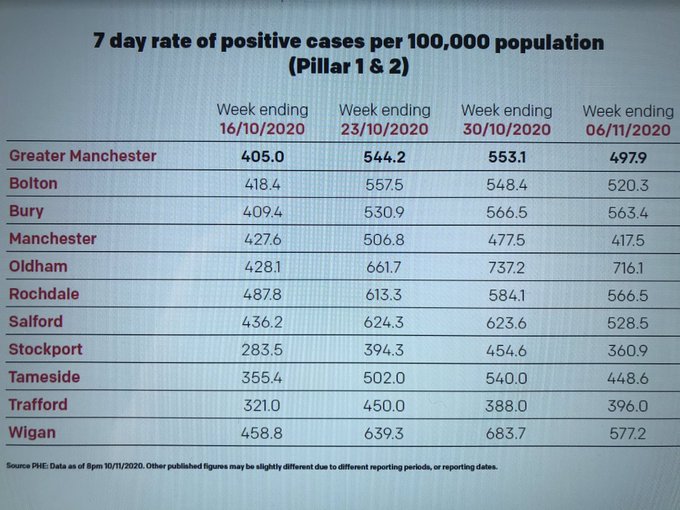 Mayor Of Greater Manchester Andy Burnham provided a glimmer of hope as he presented the latest figures for Covid across the region .

The last week was the first since the middle of August that has seen a week on week reduction in positive tests with nine out of the ten regions showing falls while we are also seeing a falling infection rate among the older age range which the Mayor described as ‘encouraging sign’.

However the pressure on hospitals continues and whilst admissions are down on the previous week, the evidence suggests that people with the infection are spending longer in hospital

Meanwhile the rate of care home infection, while not as the levels of April May, is rising.

She said that this time around the lockdown certainly did not feel like the one in the spring and traffic levels on our roads had not dropped significantly.By and large she added, people were being compliant but warned that the new regulations will be enforced very swiftly and very strongly.

Asked about compiliance, both Andy Burnham and Beverley Hughes felt that the vaccine news may lead to people being less vigilent Highhes said that it was important not to ‘jump ahead’ reminding the public that while rates may be slightly falling here, they are still very high’ compared to other parts of the country.

Hyde Road closure to go ahead this weekend