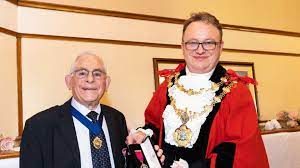 Well-known art gallery owner, former JP and councillor Henry Donn has been awarded the Freedom of the Borough.

Mr Donn has served the community both locally and on the national stage and was made an MBE in 2016 after more than 60 years of public service to Greater Manchester.

He was made a Freeman by members of Bury Council at their recent full council meeting.

“I got my MBE from Prince Charles six years ago at Buckingham Palace, and at 90 years old this further honour is the icing on the cake,” he said.

“I would like to feel that I accepted the honour on behalf of the wonderful hospitals and organisations that I was privileged to serve over the years.”

Henry was born in Prestwich in 1931 and educated in Birmingham and Salford before doing his National Service in the Corps of Royal Electrical and Mechanical Engineers.

He later started his own business as a fine art dealer, opening the Henry Donn Gallery on Bury New Road, Whitefield, which developed into publishing/wholesaling across the UK and beyond.

A friend of L.S. Lowry, who published signed and limited editions of his work, he was an honorary consultant for The Lowry Centre when it opened.

Mr Donn was elected to the old Whitefield Council in 1965, and become its chairman six years later, sitting as an independent until the council became part of the new Bury MBC.

He served as chairman of the health committee, when Whitefield became the first town in the North West to become “smokeless”.

Among his many community roles, Mr Donn was president of the St John Ambulance Cadets in Whitefield and was a founder of the Whitefield Abbeyfield Society home for the elderly.

Mr Donn was appointed a Justice of the Peace in Bury in 1975, serving on the active list for 26 years and then on the supplemental list for a further 20 years.

For many years he represented AJEX (Association of Jewish Ex-Servicemen) performing the wreath laying at Whitefield Cenotaph annually, still to this day.

The Mayor of Bury, Councillor Tim Pickstone, said: “It was a huge honour to preside over the ceremony granting Freedom of the Borough to Mr Donn. This is something we don’t do very often in Bury, but on this occasion the honour was richly deserved.

“Henry has given a lifetime of public service, across so many different fields. As the most senior living civic head in Bury, we are very grateful for his service.”