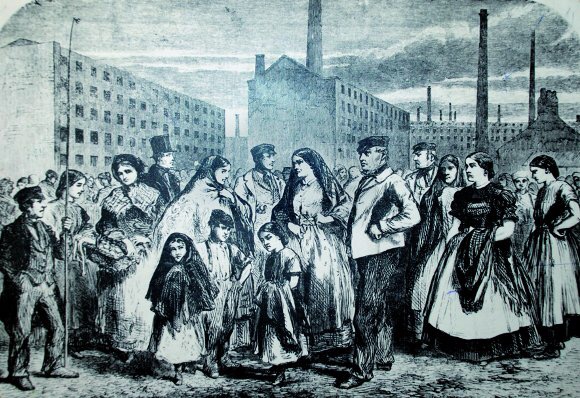 Hundreds of moving poems written by desperate Lancashire cotton workers facing hunger and homelessness because of the American Civil War have been uncovered by experts.

The conflict stopped cotton from reaching the North West, leaving people without work and facing poverty.

They took to verse to explain the devastating impact the conflict had on their lives. Now the voice of those workers has been brought to life, allowing the story of this important part of the region’s history to be told in a new way.

The writings are a rare example of working class poetry of the era, and therefore were only published in local newspapers and through letters between 1861 and 1865.

Many are written in the Lancashire dialect. Experts from the University of Exeter have been working to find letters poems, most of which haven’t been seen or read for 150 years. They have found 300 poems so far through local archives, and are confident there are as many again still to be found. Audio recordings of 100 have now been made, read by researchers.

Several of the poems have been set to music by the award-winning traditional music group, Faustus, bringing to life the extraordinary range and emotional intensity of the texts. These feature on the website http://cottonfaminepoetry.exeter.ac.uk/ and are going to be released on a special edition CD next year.

The poems describe the poverty, hunger, and homelessness of the time, as well as war, slavery, and Victorian globalisation. The densely populated and once prosperous region of Lancashire was plunged into industrial doldrums by the war in the USA.

Dr Simon Rennie, from the University of Exeter, who leads the project, said: “These poems have an extraordinary range and emotional intensity. Some are in heavy dialect, some are comic, some have high literary ambition and others are satirical. We see repetition of the same types of characters, phrases and poetic rhythms. This shows there was a vibrant literary culture among Lancashire cotton workers, and they traded ideas for mutual benefit. We believe those published in newspapers are talking to each other. They reveal a previously unheard commentary on one of the most devastating economic disasters to occur in Victorian Britain.”

Dr Mather said: “In recording these poems we are trying simply to show they can be heard as well as read. The Lancashire dialect pieces in particular are fiendishly difficult to recite, and we are aware that pronunciation of many terms may be contentious. But we hope we are bringing alive an important part of Lancashire cultural history which has lain relatively dormant for over 150 years.”