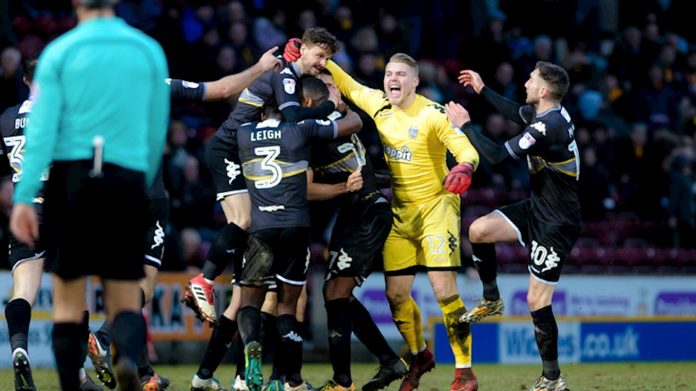 Adam Le Fondre’s sublime half-volley earned Bolton Wanderers a share of the spoils in a pulsating draw with Fulham on Saturday.

The forward came off the bench to pull the Whites level in the clash, with Matt Targett having put the Cottagers ahead early on in the game.

But Wanderers were back level just after the hour mark, with Le Fondre’s sublime half-volley from 18 yards giving Marcus Bettinelli absolutely no chance whatsoever.

Wigan suffered their first defeat of 2018, going down 3-1 to Southend United.

Paul Cook’s side couldn’t have got off to a worse start in Essex as Michael Turner put the Shrimpers ahead before Marc-Antoine Fortune scored against his former club for 2-0.

James Vaughan gave Latics hope with his first goal for the club but Michael Kightly made sure of the points in the final ten minutes, finishing from close range.

Manager Richie Wellens was disappointed that Oldham Athletic  let a two-goal lead slip against high-flying Blackburn Rovers but could not fault the effort from his players.

Duckens Nazon scored a first half double to put Latics in control at the break but two second half goals from Charlie Mulgrew and Adam Armstrong ensured Blackburn came away with a share of the points.

Bury’s unbeaten run and fight back under Ryan Lowe continued, as they battled for a point away at Bradford City.

George Miller once again stepped up for Bury, with a dramatic equaliser in the dying seconds of stoppage-time to earn the Shakers a well-deserved point against a 10-men Bradford.