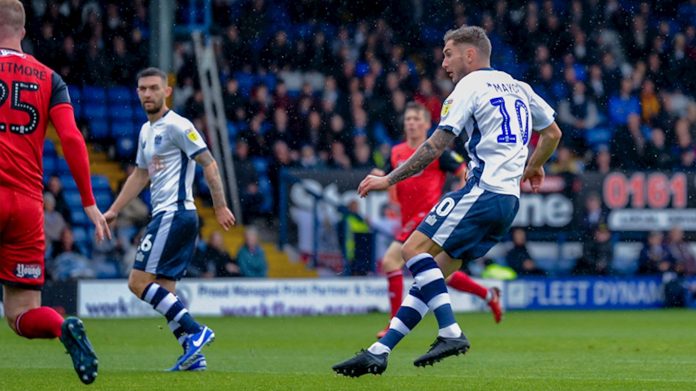 Only three of our local clubs were in action this weekend due to the International break.

Rochdale came from two goals down to secure a 3-3 draw at Scunthorpe United, extending their unbeaten start away from home in Sky Bet League One.

Keith Hill’s men were behind inside two minutes through Lee Novak’s header, before Ryan Colcough doubled the lead 16 minutes later.

Ollie Rathbone pulled a goal back shortly after the break, but Scunthorpe doubled their lead little over a minute later through Charlie Goode.

Rathbone again halved the deficit midway through the second-half and Matty Gillam grabbed an equaliser with six minutes remaining.

Dale piled on the pressure in the remaining minutes, but couldn’t quite find a dramatic winner.

Bury kept up their impressive home form, as they put four past Michael Jolley’s Grimsby Town without reply. A tremendous Danny Mayor brace was aided by goals from Will Aimson and an own goal from Danny Collins.

The win moving the Shakers up to thirteenth in the league table.

Oldham Athletic are three places above.Manager Frankie Bunn felt his side put in their best performance of the season but lacked that killer instinct in front of goal as Latics fell to a narrow defeat to Newport County AFC.

Tyreeq Bakinson scored midway through the second half as Oldham couldn’t quite get the breakthrough they were after despite several key chances throughout the match.

Nevertheless, Bunn was proud with his team’s performance: “I feel that’s the best we’ve played so far this season, I thought tactically we were spot on for the first time we encountered a team playing three at the back and I just felt comfortable throughout.” He said.