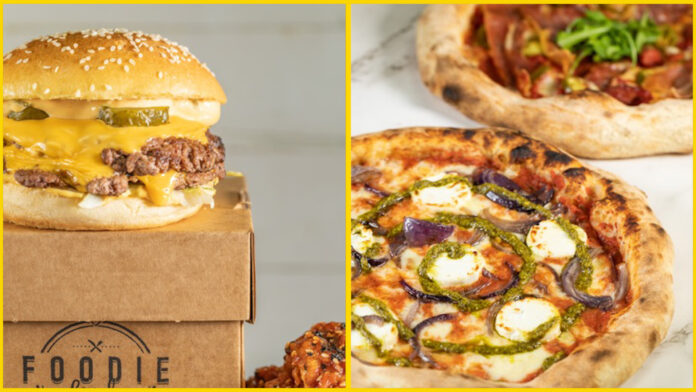 Foodie Food, a modern concept looking to include all food lovers, based in central Manchester, has opened to the public and is taking orders across the city.

Foodie Food, whose kitchen is a stone’s throw from Manchester Piccadilly will cater for pizza & burger lovers alike, while offering many vegan options also, but not only vegan clientele will be pleased, as those with food allergies such as gluten and dairy will be able to find their favourites on the menu also; Gluten & dairy free pizza’s, Vegan burgers and gluten/dairy free buns, meaning that nobody is left out!

On the menu are delicious Italian-style pizzas that make use of beloved San Marzano tomatoes as well as Fior di Latte mozzarella, in addition to a host of other toppings. Classic combinations like goat’s cheese, green pesto, red onion and basil, and nduja, pepperoni picante and red onion join the more contemporary style pizzas like the BBQ, made with chicken, peppers and red onion on a smokey barbecue base.

The Vegan options include, vegan cheese used on the Vegan Margarita and peppers, red onion, black olives and mushrooms on the Vegan Foodie. Any of the pizza bases can be offered gluten free!

On the other half of the menu, meanwhile, there’s an array of burgers, from the cheeseburger made with smashed beef patties, American cheese, iceberg lettuce, red onion and pickles with Foodie Burger Sauce to the buttermilk fried chicken burger with red cabbage slaw. Vegan options are made with Beyond Meat smash patties alongside vegan cheese and a vegan version of Foodie Burger Sauce.

Sides aren’t an afterthought, either: a list of 10 impressive sides includes irresistible mac n’ cheese bites, chicken wings available tossed in barbecue or buffalo sauce, piri piri fries, vegan nuggets and more. Garlic bread, made with Foodie Food’s delicious pizza dough and made with or without Fior di Latte mozzarella, are also available. As with the mains, gluten and dairy free options are available.

Foodie Food has a personal touch, with co-founders Aaron and Stephen regularly found in the Foodie Food kitchen ensuring pizzas, burgers and sides and being prepared and sent out to the highest standard.

While orders can be made easily via Deliveroo, Uber Eats and Just East, the founders recommend ordering directly on the phone, Foodie Food app or website so customers can access special deals not available on other platforms.

Furthermore, 10% of all orders made directly to the company are donated to the local foodbank.

Foodie Food’s menu has been built and refined over a number of years, and there’s never been a better time to launch such a diverse food offering in the city, with Mancunians gathering in gardens and parks for drinks, lunch and dinner. Foodie Food can deliver to private gardens and parks, and with collection also available, it’s destined to be a hit with hungry customers throughout the city.

Jazz on Film at HOME

Eat Out to Help Out at Trafford Centre