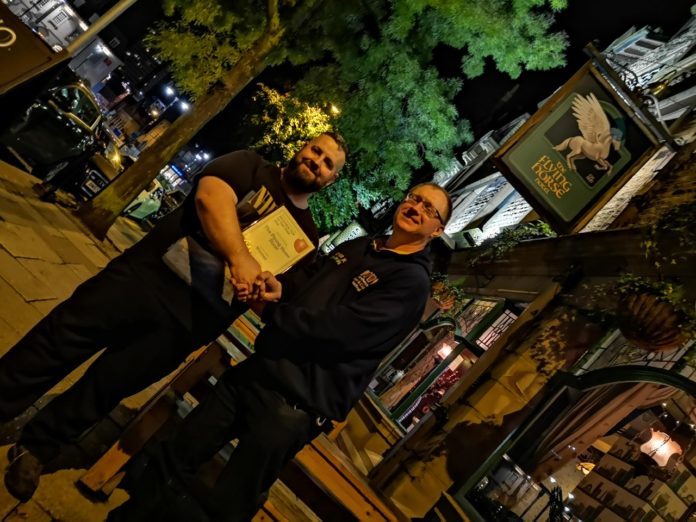 A Rochdale pub has romped away with the Greater Manchester Pub of the Year for the second year running.

The Flying Horse adjacent to Rochdale’s magnificent Town Hall was in need of Ben Boothman’s vision when he took it over. Trade at the site started in 1691, but it endured a spell renamed as The Sports before he took the reins. Ben could see the potential to transform the town centre building to provide a destination for drinkers, diners and overnight visitors, as well as an ambition to become the town’s premier free live music establishment. But a long-term commitment to providing the very best real ales underscored his efforts.

Ben is well-known in amateur rugby league circles as he combined turning out in the green and gold colours of Rochdale Cobras alongside his work at the Flying Horse. It’s a real family success as mum Pat has supported Ben throughout, taking charge of functions as well as finding time to run a popular outside catering business, Quirky Catering. The pub is also a vital supporter of town centre initiatives including Rochdale Food and Drink Festival and the Feel Good Festival.

Recognised by the Rochdale, Oldham & Bury branch of the Campaign for Real Ale (CAMRA) as its pub of the year for the last three years, the Flying Horse first made the Good Beer Guide in 2002. The pub’s growing success saw a doubling in size of its real ales to twelve handpumps, with traditional ciders, craft keg and a selection of foreign beers making it a drinkers’ delight.

The Flyer, as locals call it, lined up this year against eight other exceptional pubs nominated by the Greater Manchester branches of CAMRA. An expert team of volunteer judges drawn from the 9,500 members in the region visited unannounced and evaluated the qualities of each. They scored the pubs on a variety of weighted features including quality of welcome, value for money, community focus and – most importantly – the quality of beers and ciders.

Regional judging coordinator for CAMRA, Caroline O’Donnell added: “Almost all our judges mentioned the friendly welcome and excellent service from staff. They noted bar staff knew about the different beers and ciders, and were happy to give recommendations. The pub has a clear and informative digital display board showing the style and origin of beers. It has strong links with community activities in the town centre and is clearly popular with young and old. Most also commented on the building’s attractive interesting features and the lively and friendly atmosphere.

“As you’d expect from CAMRA judges, the scrutiny was closest on the quality and condition of the beers and traditional ciders. The Flying Horse passed with flying colours!”

CAMRA’s regional director Phil Moss said: “To be judged our Pub of the Year for a second successive year shows the Flying Horse is a true thoroughbred. If you were to design the ideal pub from scratch, it would resemble this place – well-supported by its regulars, and attracting visitors for its beer, food and accommodation offers. I’m impressed how it successfully forges the best of traditional and modern – but at its heart is a landlord whose commitment to real ale makes the Flying Horse a worthy winner.

“The pub is now in the last 16 across the country as CAMRA seeks to identify the national Pub of the Year. Rochdale has form in this race as The Baum – also under Ben’s wing now – was a previous champion in 2013. I think the Flyer is more than able get over the final hurdle!”

Ben Boothman is thrilled with the award. He said: “This success is down to a fantastic team, this year headed by my bar manager Andy Jenkins and his assistants Lucy and Jack. We all share a belief that happy customers will tell everyone about their good experiences. And I’ve been helped by our suppliers and breweries who consistently provide customers with the best food and drink.

“I’m proud of our welcoming atmosphere and delighted the judges mentioned this in their assessments. Keeping and serving our traditional beers and cider in tip-top condition is a matter of personal pride.

“I’m committed to permanently feature beers from our fantastic local breweries. Rochdale is now recognised as a great town for beer choice, and I’ve enjoyed strong cooperation from the local CAMRA branch. There’s a lot of history associated with Rochdale but it has a great future too.”