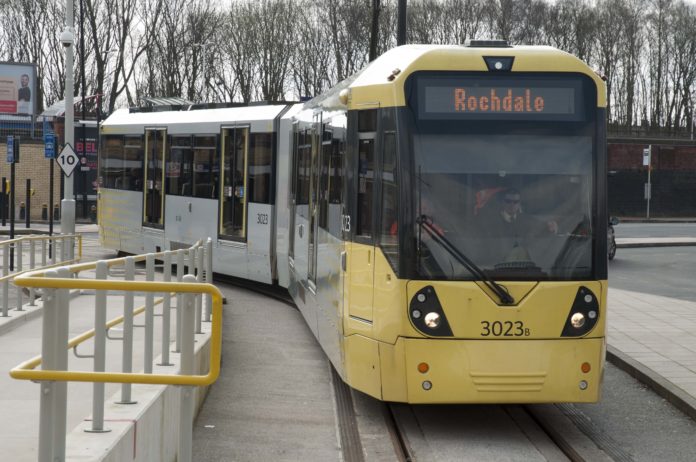 This weekend will mark five years since the extension of Metrolink into the heart of Rochdale town centre – as part of a development that has seen the popularity of the line more than double.

The extension provided around 1km of street-running track along Drake Street to link the Rochdale Railway Station stop with the new Rochdale Town Centre stop on Smith Street.

The first service to leave the Smith Street stop did so at 5.53am on Monday 31 March 2014, just three months on from the Oldham town centre extension which saw an additional four stops open on the Oldham-Rochdale line.

Around 24,500 tram passenger journeys are now being made to Rochdale town centre every month, boosting access to retail, leisure and employment opportunities as well as bus services from the town’s interchange.

The Rochdale town centre line was completed as part of the ‘big-bang’ Metrolink expansion that has seen the network treble in size.

“Not only are we providing fast, frequent transport links that give better access to jobs, retail and leisure both locally and across the region, we are also giving people in the area a real alternative to the car.

“This is essential as we look to improve the quality of the region’s air by reducing the number of harmful emissions and cutting levels of congestion.

“Despite its success, it’s vital that we don’t stand still and continue to look closely at Rochdale’s transport needs for the future, such as a potential location for one of our tram-train pilots.”

Steve Rumbelow, chief executive of Rochdale Borough Council, said: “Metrolink has brought considerable economic and social benefits for our borough over the last five years and is a key part of our town centre regeneration programme. It has improved connectivity, taken cars off the road, boosted investment, and as it is situated next to our new retail and leisure development, Rochdale Riverside, will make it fantastically easy for people to get here.

“As we move into an exciting new era and the next phase of our regeneration work, the tram network will continue to play a key role in bringing people from across the region into Rochdale. We are also continuing our campaign to create a new route between Middleton and Manchester city centre, which was recently included in the Greater Manchester Transport Strategy 2040 Delivery Plan.”

Manchester’s sites of suffragette protest and sabotage among those officially recognised in nation’s...