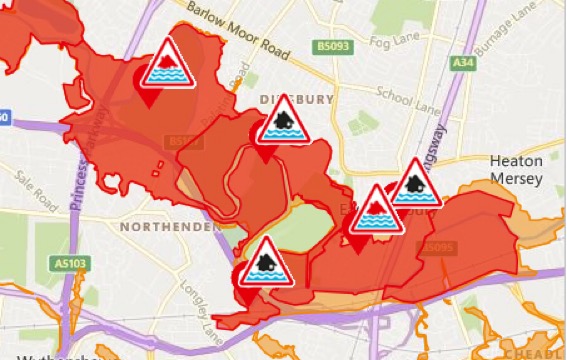 Assistant Chief Constable Nick Bailey, Chair of the GM Strategic Coordination Group for Storm Christoph, said: “The latest update we have received has suggested that we are past the worst point of potential flooding and therefore we have taken the decision, following consultation with the Environment Agency and Met Office, to step down the major incident that was declared on Tuesday morning.

“The severe flood warning for parts of Didsbury is no longer in place; however I want to be clear that this does not mean that we are withdrawing resources from the areas affected and others identified as potentially vulnerable.

“Residents will continue to see an increased presence from emergency services, local authorities and other partnership agencies as we support those still facing challenges caused by the flooding and a safe return to their homes.

“There remains severe flood warnings in the Little Bollington area of Trafford and we have already been in contact with those residents who may be affected to advise them on potential evacuations and preparations that can be made.

“As a partnership, we will continue to monitor the situation and should there be a need to step up a major incident and resources again then we are prepared to do so. I would urge the public to remain on alert for potential disruption caused by the flooding and only travel where absolutely essential.

“We will continue to keep the public where possible and appropriate on the latest position with regards to this situation. More information for anyone with concerns about flooding in their area can be obtained by contacting your local authority who will be able to sign-post you to the most appropriate information and support.

Police and other agencies have been working through the night  evacuating up to 2,000 properties effected by flooding in the Didsbury and Northenden areas

These are currently four severe flood warnings in the region

While the following flood warnings are in place in our region

Northern Rail is advising customers not to travel on much of its routes in the North West until at least 12pm today.

All services between Manchester,Warrington and Liverpool are currently cancelled due to flooding and Services are  suspended on CrossCountry between Birmingham New Street and Manchester Piccadilly due to flooding at Stoke-on-Trent and Crewe.