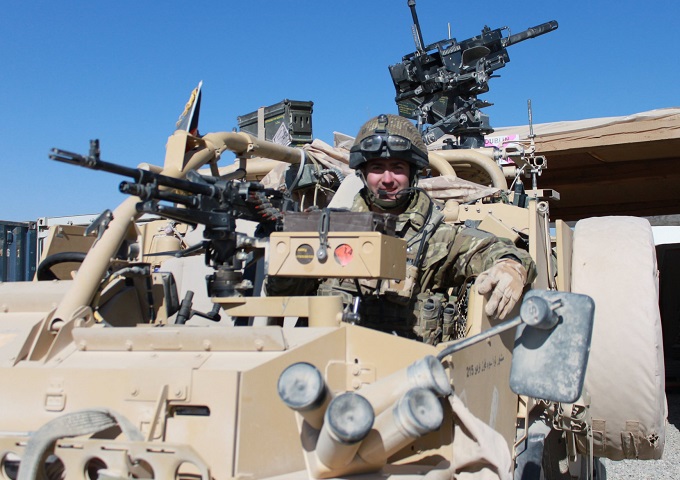 A Former soldier who served in Iraq and Afghanistan after leaving school aged 16 is graduating with a first class history degree from the University of Salford.

He served tours of duty in Kosovo and Northern Ireland, but a back injury sustained during a helicopter accident in Helmand Province led to his discharge from the forces.

Paul applied to study Contemporary Military and International History at the University of Salford through the alternative entry scheme – providing access to higher education for talented students unable to get in through traditional routes, such as mature students who have been out of education for a long time.

Although his original plan was to go into teaching – having trained US servicemen in counter terrorism operations while serving in Baghdad – Paul enjoyed the academic life so much he is now hoping to stay on to study a master’s degree.

Now, after writing his final dissertation on ‘the myth of the special relationship between Britain and the US’ and being nominated for a student ambassador award, Paul will graduate with a first class degree at The Lowry next month.

The 39-year-old is involved in veterans’ groups and works as the Vice Chair of the local Royal British Legion branch near his home in Atherton, where he lives with his wife and five-year-old daughter. During his time at the University of Salford, he helped support his younger student colleagues, acting as a mentor and running revision sessions.

He said: “I learnt a lot in the Army but it’s completely different from studying at university, so initially I found it very difficult. I’d had a long time out of education, and when I was at school I was much more interested in sport than in my classes.

“It was a very gradual learning curve, and it was something I had to work at, but my grades started to climb up. I had a lot of support from my lecturers, particularly when I had to go to medical appointments for ongoing problems with my back, but I really need to thank my wife for being so understanding over the last three years and letting me give up family time to study.”

Brian Hall, who leads the University’s Contemporary Military and International History programme, said: “Paul came to us with little formal academic experience, but he has absolutely thrived at Salford and the life experiences as well as the confidence he gained in the Armed Forces have clearly served him well.

“As well as doing incredibly well academically, he’s also been a constant source of support to the other students, providing emotional help when things were getting tough as well as offering help with their studies.”