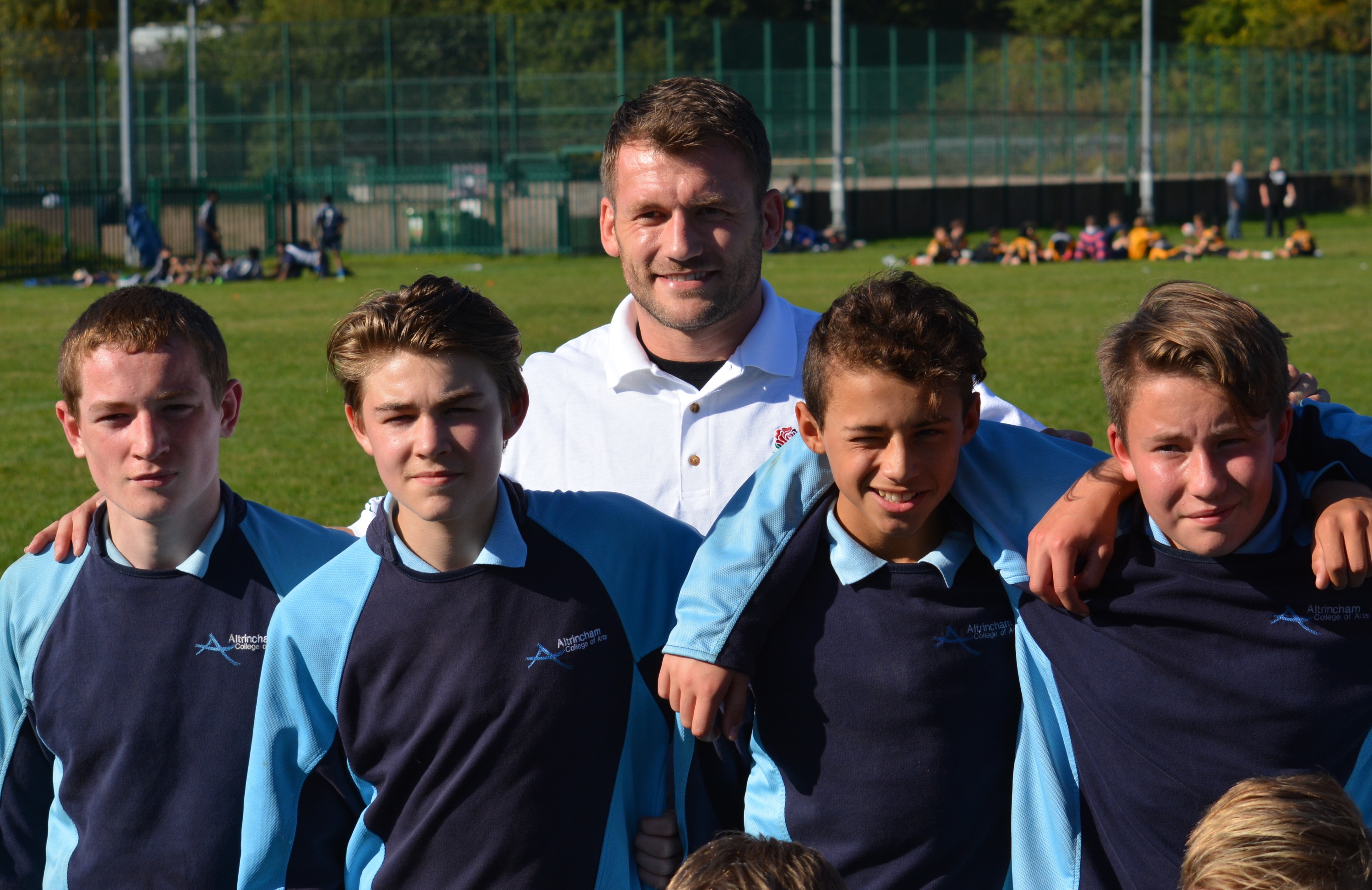 England may have been knocked out of the Rugby World Cup but it hasn’t dampened the game fro Manchester’s school pupils in year 9 who received a visit from former England International Mark Cueto in a special event organised by England Rugby with the support of staff from the Manchester office of property firm CBRE.

Cueto, who has 50 Caps for England and scored a hat trick of tries against Romania in the 2011 World Cup, took to the playing field with schools from Manchester at Eccles RFC. The schools were showcasing their new rugby skills and helped oversee an elite coaching session. Students from the schools have begun their journey as a new rugby playing school and have fully embraced the new sport and ethos that rugby union brings.

The event was organised to mark the nation’s role in the World Cup and the successes of England Rugby’s leading participation legacy programme All Schools. With the arrival of the new school term, England Rugby, with the support of CBRE, have reached their goal of 400 non-playing state secondary schools to be rugby playing schools by this year’s tournament.

The legacy won’t stop there. The next try-line is to have another 350 schools take up rugby union by 2019, which will take the total number to 750 schools and leaving a positive legacy for one million children.

Mark Cueto, Former England Rugby International: ““I’m proud to be supporting All Schools and to play my part in helping to spread the message of rugby. With the World Cup now in full swing, this is our best opportunity to broaden the reach of the game by taking rugby and its core values to new places and people where it hasn’t always been. I hope more young people come to love the game as much as I do.”

Harry Bardsley, Head of Rugby at Oulder Hill Community School commented: “Manchester is a football focused community. The introduction of rugby via All Schools has had a real impact on our students and the schools as a whole. Rugby is a sport for all, girls, boys, big or small and with every child, a sense of pride in playing England’s great game. The emphasis on rugby’s key values of teamwork and discipline has seen students gain more confidence both on and off the field. Events like this help the schools to put on their shirts, support their schools, support their country and showcase the potential benefits rugby can bring.”

Linked to more than 140 community rugby clubs, over 60% of All Schools are running a mixed or girls’ programme, with 35% of all the players female. More than 130,000 students took part last season and many have joined a local rugby club and are playing regularly with them. More than 600 teachers were also trained as coaches and match officials.

Crucially research conducted by Sheffield Hallam University on behalf of England Rugby has shown that 65% of young people taking part in All Schools are more confident as a result.

Callum O’Connor, a student from St Patrick’s RC High School commented: “I was never good at football and having never played rugby before I wasn’t sure whether I would be any good. It was great to have England Rugby support our teachers and school and learn how to play the game. I really enjoy being part of my team, in our new kit and enjoyed tackling other players and throwing backwards to go forwards. A few of my friends and I are heading to our local club to start playing on their U12’s squad. After my first competition, I can’t wait until next week when I get to play again.”

CBRE was announced as principal partner in September 2014 and in their first season, 200 CBRE Staff volunteered as coaches, referees or activators. CBRE’s commitment to All Schools helps make a positive difference to young people’s lives – helping them build advantage on and off the field and positive futures in the communities in which they operate.

Ciaran Bird, CBRE UK Managing Director commented: “The success of this event demonstrates the impact that All Schools is already having through increasing access and participation in rugby right across the nation. Schools are now able to offer it to pupils, in particular to girls and we are proud to have been able to support England Rugby with the help of our staff, who are volunteering as coaches, referees and activators throughout the country.’