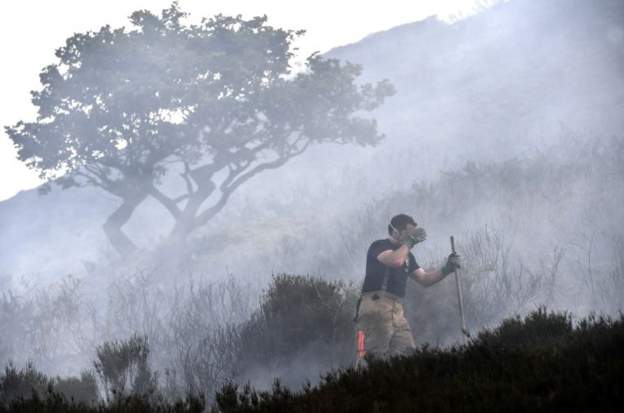 Around 34 homes in Calico Crescent were evacuated as a precaution on Tuesday night but residents were allowed back into their homes on Wednesday lunch time (June 26) following air quality assessments.

All evacuated residents have been staying with friends and family but Tameside Council is on standby to provide accommodation or support should anyone need it.

As of Wednesday lunchtime there were seven separate incidents ongoing on areas of the moors, including Calico Crescent, Intake Cottage, Intake Lane, Caste Farm, Dovestones, Higher Swineshaw and Chew Road.

Firefighters on a total of 29 fire engines from Greater Manchester and neighbouring fire and rescue services have been continuing to use beaters and specialist wildfire equipment to tackle the flames.

In addition, Greater Manchester Police have deployed a helicopter to assess the scene and United Utilities have provided a helicopter that can be used to drop water onto areas of the fire that is difficult to access from foot.

Greater Manchester Fire and Rescue Service’s Assistant Chief Fire Officer, Dave Keelan, said: “We have been liaising with a military advisor on the scene and following those discussions we have requested military assistance from the Ministry of Defenseand those discussions are ongoing.

“There’s still a lot of smoke from the fire but air quality levels are being monitored regularly in different locations. Air quality is currently at a safe level and therefore residents have been let back into their homes.

“We don’t know the cause of this incident at this stage and it would be very difficult to ascertain the cause due to the extent of the damage but we will be looking into that once we have tackled the fire.

“We’ve had a great deal of support from the public and charities – people have been donating supplies and we are really grateful, however, we really need people to stay away from the scene Please listen to the advice and continue to follow official updates for the latest information.”

Four schools – Mossley Hollins, Millbrook, Buckton Vale, St Raphaels – were closed on Wednesday because of the impact of smoke.

Tameside Council Executive Leader Cllr Brenda Warrington said: “Huge thanks must go to everyone in the emergency services – and those assisting – who have been working hard in extremely challenging conditions.

“This is a worrying situation but strength of community spirit has been amazing – everyone is supporting each other and the offers of help have been incredible, from offers of places to stay to local people bringing refreshments to people working at the scene.

“We are working closely with our partners and constantly monitoring the situation to ensure the safety of the local community and offer support where needed. In the meantime, we would urge everyone in the vicinity to heed the health advice of keeping windows and doors closed and avoiding the smoke wherever possible.”

The advice from Public Health England remains the same – residents in areas affected by smoke should stay indoors, keep their doors and windows closed, and tune in to the local radio station for advice and information. Motorists who have to travel through the smoke should keep windows closed, turn off air conditioning and keep their air vents closed. If people need to be outdoors, they are advised to avoid areas affected by any smoke or ash, or to limit the time that they spend in them. Individuals with heart or lung diseases such as asthma should ensure they have access to their medication and seek medical advice if their symptoms worsen.

Prime Minister Theresa May sympathised with those affected, commended the emergency services and said the Home Office was “monitoring the situation closely” during Prime Minister’s questions at lunchtime.

Meanwhile the fire will have “devastating consequences” on local wildlife, the director of conservation at the Wildlife Trust for Lancashire, Manchester and North Merseyside has said.

The heat generated by the fires is devastating to the fragile upland moorland – only the most mobile of animals escape and of course we are in peak breeding period for many.

The animals are on the moors because they like the conditions they find there and ultimately depend upon the plants.

It will have devastating consequences on birds like the curlew which are feeding chicks at the moment. Meadow pipit also nest in tussocks of grass, nests and chicks will not have survived a fire like this.

The RSPB team in Dovestones tweeted:

“Our team are out assisting with logistics and fire fighting the Saddleworth Moor fire. We won’t know the full scale of the damage to the wildlife and habitats until it is safe to assess it, but it will undoubtedly have affected species such as hares, voles and nesting birds.”