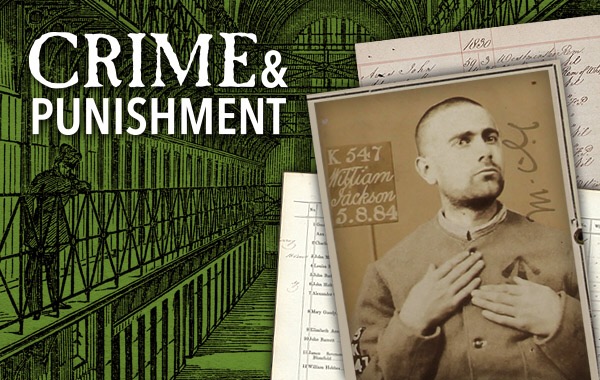 These records, from Home Office, Metropolitan Police and Prison Commission files series, span over 150 years from 1779 to 1935.

They reveal many ordinary and extraordinary stories of criminals, victims and law enforcers. The records include mugshots and colour images of historical records, as well as detailed accounts of Victorian serial killers, notorious executioners, and the only assassination of a British Prime Minister.

The records also uncover some of the harsher sentences given to many for what are now often considered petty crimes. Thirty-five year old artist Edward Ball from Eastbourne was given the death sentence with no mercy to trying to use a forged £5 note.

New details about the case which provided the inspiration for a character in Charles Dickens’ Bleak House are uncovered among the records.

Pleas for the lives of Maria Manning and her husband Frank to be spared after they are sentenced to death for killing Maria’s lover, Patrick O’Conner, are revealed. They fell on deaf ears, with the couple hanged in front of a crowd which included Dickens in London in 1849.

The author’s horror at seeing the execution motivated him to campaign against the death penalty and write the character of Mademoiselle Hortense.

Other records tell the stories of notorious figures including arsenic poisoner Mary Ann Cotton, “efficient” executioner William Calcraft and John Bellingham, who was responsible for the only assassination of a prime minister in Britain’s history.

Walking the Nile, The Himalayas, now the Americas for Levinson Wood

Give cities control over a third of corporation tax to fix UK’s stalling productivity...