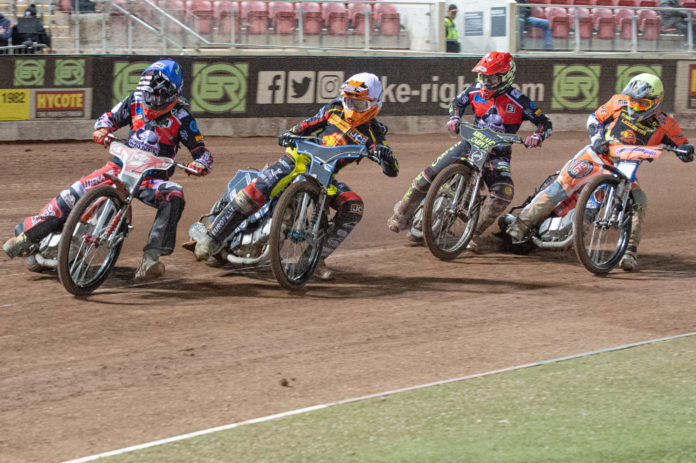 A valiant effort from the Belle Vue Colts ended in one final 47-43 victory over the Leicester Cubs, but it was not enough for the home team to secure the 2019 National League Knock Out Cup.

It was always going to be a challenge for the Cool Running Colts, especially after the visitors built up such an emphatic aggregate lead in the first leg, but they approached it with fervent determination.

Both sides were so evenly matched throughout the night, and for it time it looked like the meeting may go down to golden heats as Belle Vue started to gain ground on their midland rivals.

But even despite cutting the overall deficit down to just 10 points, the Cubs responded quickly and by Heat 13 had all but secured their second piece of silverware in as many days.

Connor Bailey top scored for the Cool Running Colts with an impressive 12+2 points while Leon Flint added a brilliant 11 points and skipper Kyle Bickley rounded off his season in the hot seat with 8+1.

Bailey said: “I think we can be proud of ourselves this season. We finished second in the league and were runners up in the KOC. There’s only one team that’s bested us all year and that was Leicester.

“We just fell short at the end, but all the boys did a fantastic job, and hopefully we did ourselves and the club very proud. It’s a shame we didn’t win a trophy, but we finished our year very strongly.

“Both teams were evenly matched. We had a bit of an off night at Leicester which unfortunately led to our downfall in the end, but we gave it everything and I don’t think we could’ve done more.

“Congratulations to the cubs, they were a good team over two legs. It felt good for us to close the season with a home win. Hopefully the team can learn from this and come back stronger in 2020.”

The Cool Running Colts boxed off the 2019 British Speedway season with a significant win on home turf. Both they, and the Rentruck Aces, will be back challenging for honours in March 2020.

Aces Into The Play Offs

Aces Victorious While Colts Miss Out