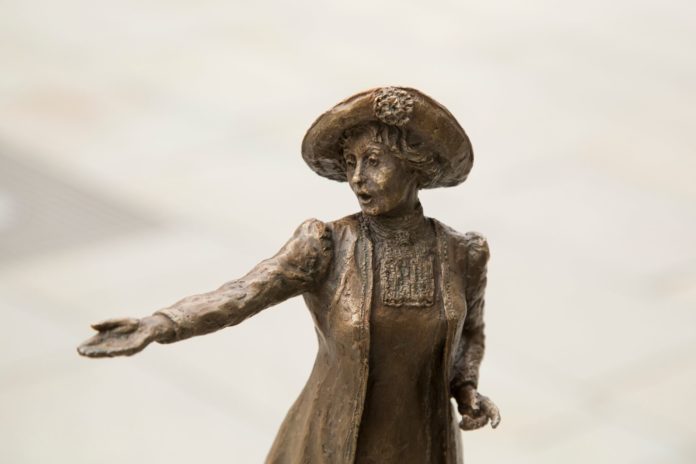 On Friday 14 December 2018, exactly one hundred years since the first women in the UK voted in a General Election, a statue of Emmeline Pankhurst will be unveiled in her home city of Manchester.

This will be the climax to a year in which the city began by marking the centenary of the first women achieving the right to vote and throughout has explored its radical roots and central role in both the suffragette and suffragist movements.

That it should be a figure of Emmeline that takes her place amongst the city’s statues was a public choice and it is the public that will be at the heart of this historical unveiling. It will be a day that everyone is invited to participate in that will embrace, bring together and welcome all those who have supported the Our Emmeline project.

Emmeline’s great grand-daughter Helen Pankhurst had the vision this should be an occasion that sees people gather from across Greater Manchester to march to meet Our Emmeline.

To reflect this, two symbolic rallying points have been selected; the Pankhurst Centre, the former home of Emmeline Pankhurst and the birthplace of the suffragette movement; and People’s History Museum, the national museum of democracy. Marchers will gather at Great Northern Square, just a short walk from People’s History Museum, and Denmark Road, just a short distance from the Pankhurst Centre, and then converge collectively at St Peter’s Square to greet Our Emmeline.

Gail Heath, Chief Executive of the Pankhurst Trust, says, “2018 has been a year that has inspired all of us who are working to carry forward the legacy of those who have fought for equality and it will be wonderful to end the year with such a celebratory and poignant moment.”

Katy Ashton, Director of People’s History Museum, says, “That this significant chapter in the history of our democracy should be marked by an event of the people says much about the spirit of Manchester, and we are delighted to be playing our part in this momentous occasion.”

Marchers and those gathering in St Peter’s Square will be welcomed by the uplifting voices of Manchester Community Choir before hearing from Councillor Andrew Simcock, Helen Pankhurst and sculptor Hazel Reeves, who will share the story of Our Emmeline. Also present will be the Minister for Equalities Baroness Williams, Lord Mayor of Manchester, Councillor June Hitchen and Manchester City Council Lead Member for Women, Councillor Sarah Judge.

Andrew Simcock, Chair of the Emmeline Pankhurst Statue Committee, says, “Helen Pankhurst’s vision and all those involved in this project have inspired what will take place on the day; this will be a coming together of people to celebrate Emmeline and her legacy and to also celebrate the essence of Manchester, as a place of progression, inclusivity and groundbreaking ideas.”

When Emmeline is unveiled the sight will be not unlike a scene at the height of her campaigning, with her stood aloft a chair to address those gathered to hear her words. In Hazel Reeves’ design, the meeting circle in which Emmeline is stood, is symbolically orientated towards the former Free Trade Hall, where the first disruptive meetings of the suffragettes took place.

Helen Pankhurst, great granddaughter of Emmeline Pankhurst, says, “Our Emmeline is not only a wonderful tribute to the life and work of Emmeline Pankhurst, but is also an incredible legacy to the suffragette movement and the role of Manchester’s women in campaigning for the vote. That she should be unveiled exactly 100 years since the day some women first went to the polls and a few first stood as MPs in a UK election is especially poignant. I hope that Our Emmeline inspires all those who are now helping to continue the ongoing journey towards achieving equality.”

The historical unveiling of Emmeline Pankhurst’s statue will be the first of a woman in Manchester since Queen Victoria was unveiled in Piccadilly Gardens in 1901. Emmeline Pankhurst was selected as the public’s chosen female icon to be immortalised as a statue from a long list of 20 inspiring Mancunian females.

As well as voting for Emmeline, the public also voted for Hazel Reeves’ ‘Rise Up, Women’ as the winning design from a short list of six maquettes. The unveiling on 14 December 2018 will be the culmination of a campaign launched in 2014 to celebrate the significant contribution of women to the city.