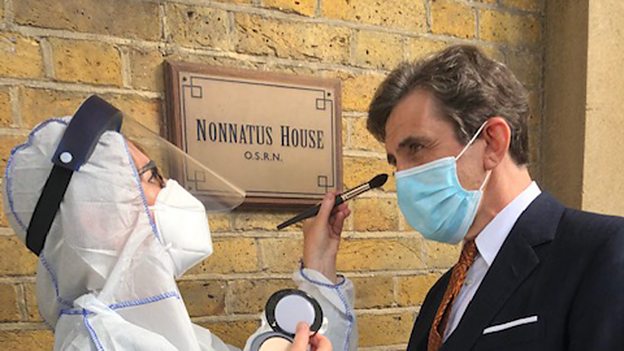 The door to Nonnatus House has been unlocked for filming to start on the Christmas Special of the tenth anniversary series of Call The Midwife.
Made by Neal Street Productions for BBC One, the award-winning drama series will return in time for Christmas this year with a 90-minute special episode.

Created and written by Heidi Thomas, this year’s Christmas Special is set in December 1965. Everyone at Nonnatus House is looking forward to traditional celebrations with all the trimmings, but nothing goes quite to plan. Sister Monica Joan is rushed to hospital, and Trixie is incensed to receive a subscription to a Marriage Bureau as a Christmas gift.

Meanwhile, a surprise reunion for Shelagh involves her in a deeply moving birth, and the circus arrives in Poplar, bringing new friendships, new experiences, and an exciting adventure for Nurse Crane.

As the production is taking place during the current Covid-19 pandemic, additional controls are being implemented. Call the Midwife’s production team and Neal Street Productions are committed to helping get the country back to work and have developed comprehensive protocols in accordance with current government guidelines to ensure that the series is produced in a safe and responsible manner. They have worked closely with industry bodies and the BBC to develop the detailed Covid-19 protocol policy, implementing various safety measures and testing and will keep it under constant review.

There is also a designated Covid-19 supervisor on set to look after the production’s safety precautions and efforts. The health and safety of the cast and crew is the highest priority. Due to the later than usual start to filming, series 10 in 2021 will consist of seven hour-long episodes instead of eight.

Dame Pippa Harris, Executive Producer, says: “Alongside the rest of the country, we have all been devastated to see how Covid-19 has affected people around the world. Our midwives and nurses may not be the front-line heroes of today’s NHS, but by getting back to work, they, and we, hope to bring some joy and respite into people’s lives.

“In such difficult times, the values of Call The Midwife seem more resonant than ever. In series ten we will continue to celebrate the skill and bravery of the UK’s NHS whilst bringing laughter and love into our homes.”

Heidi Thomas, Creator, Writer and Executive Producer, says: “Everyone is overjoyed to be whisking the dust sheets off Nonnatus House and getting back to filming after lockdown.

“It is a particular thrill to be able to deliver the Christmas Special on time, just as we promised at the start of the pandemic. We are very much a family at Call The Midwife, and like families everywhere, we have missed each other. We will now be putting more love and energy into our work than ever and can’t wait to share Series 10 with our fantastic, loyal audience.”

Mona Qureshi, Executive Producer for the BBC, says: “We are so delighted that the Call The Midwife team are able to re-assemble to bring us Series 10 for the new year, and that they will also be gifting us a Christmas special for 2020 – the warm embrace of the nuns and midwives of Poplar feels especially needed this year!”

Salford campus to be ‘living laboratory’ for green infrastucture