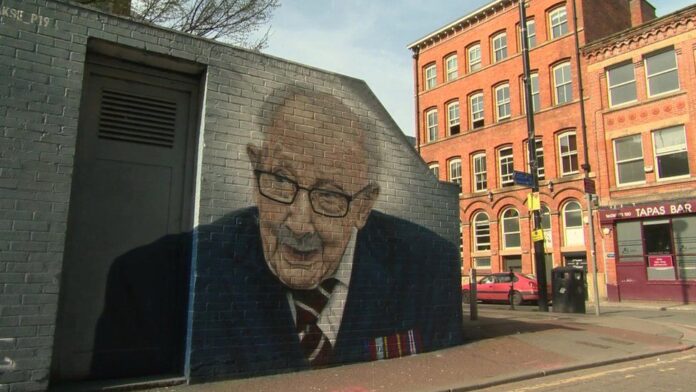 In the middle of Winter it’s hard to imagine how the view outside your window will ever be spring again. Moribund, stony ground suddenly blooming with colour..? How..? And yet it comes. The terrific Manchester spring we are enjoying right now is, for me, a reminder of the even more glorious spring weather from two years ago.

In those heady days of the first lockdown the figure of Captain Tom Moore was everywhere. The centenarian army veteran who raised over £30 million for NHS charities became one of the symbols of resilience across the pandemic. His credentials – and with them implication that private charity fundraising should partly fund the NHS – were certainly convenient for some sectors in British public life.

In hindsight, was it not easier to focus on the exceptionalism of one elderly man than on the very real horror of the government’s treatment of the elderly in general as the virus ran riot?

Come winter Captain Tom died, and by next spring Manchester had its very own mural. Appearing on a wall intersecting Tib Street and Thomas Street, it was the work of local artist Akse-P19 who has made a positive contribution to the city through his murals of George Floyd, David Bowie (both Stephenson Square) and Marcus Rashford (Copson St, Withington).

Since then, questions have been asked about the Captain Tom Foundation’s conduct. Grants were swallowed up by management costs. Payments were made to companies owned by his family. Moore’s daughter, Hannah Ingram-Moore, has denied reports that she planned to pay herself a six-figure salary as foundation CEO, and the Charity Commission is currently investigating. 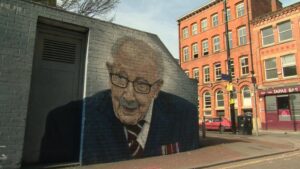 It isn’t just this that leads one to question whether the mural is an appropriate decoration for the city centre.

It’s ill-fitting with the Northern Quarters’ character for a start – I mean, what exactly is its connection to the city or the spirit of those streets? Last summer’s Rashford mural lent a gesture of solidarity to a crusading Mancunian on the footballer’s home turf. The enduring significance of George Floyd’s murder and its resonance to many in Manchester is obvious. Even the Bowie mural – the artist was never known for his connections to Manchester – at least says something about the perceived spirit of the Northern Quarter.

So maybe a rethink is in order for this one? Mawkish and ill-fitting, is the mural right for the Northern Quarter? Is it really what we want to take from our memories of the pandemic?

Towards Sounds From The Other City

This weekend, the Sounds From The Other City music festival returns to Salford.

It says something about the effect of successive lockdowns on the spirit that I remember vividly the cancellation of 2020’s event – though nothing of when it was canned the following year.

Independent and DIY music promoters have had a rough three years – first with  pandemic and then with the quirks of the government’s handling of the entertainment sector. When it comes to new talent events such as Brighton’s Great Escape may garner more fevered industry chatter, but take it from me: you are far more likely to find something interesting, exciting and resonant blaring down Chapel Street.

We’re lucky in this city to have a diverse array of promoters who come together to produce SFTOS: Tru Luv, Band On The Wall, Kiss Me Again, Now Wave, Hey! Manchester, Alphaville, Partisan Collective and many more.

Be under no illusions as to the ground-breaking potential still live and kicking here.

If I Had A Gun 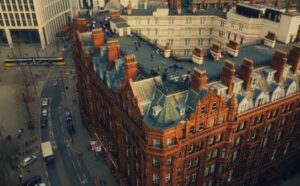 What did you make of the Liam Gallagher single? Whenever the Conservative Party conference is held in Manchester, you see police snipers perched on buildings around the conference centre and the Midland Hotel.

When I saw that video shot on the roof of the hotel…let’s just say that those snipers became more vivid in my imagination than they previously were.

Album due next month.