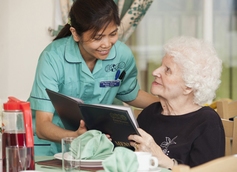 Care staff who help some of the city’s most vulnerable or ill people at home with washing, eating and other essential daily tasks, are set to get a £1 an hour pay rise.

The news announced yesterday by Manchester City Council means that home care assistants – who are often some of the lowest paid people in the city – will see their wage rise to £8.75 an hour, which is Manchester’s Living Wage.

The move, which will be driven by a £1.5m cash boost from the council to commissioned organisations who supply care staff – on the condition that the money means employees will receive a proper living wage.

Currently, Manchester pays those home care businesses an average of £13.50 per hour for help in people’s homes. Now, it will go up to £15.20 per hour with the clear expectation that the rise will benefit care staff from April 1.

Long-term, the move is part of future ambitious plans between the council and its NHS partners for how services are commissioned , to recognise the invaluable role that the city’s home care staff provide, and to keep and attract more people to the role.

Councillor Bev Craig, Executive Member for Adult Services, Health and Wellbeing at Manchester City Council, said: “This money is a way of recognising the hard work of those workers who give the sort of daily care that’s not only practical, but is a lifeline in providing the dignity that we all need.

“We all know that some things like dignity and wellbeing can’t have a price put on them. But, in reality, when you consider how this sector keeps people living longer and better at home, you can see not only the moral, but economic reasons too.

“Quite simply, this is the right thing to do and by investing in our people and services we will also help with tackling shameful in-work poverty in Manchester.”