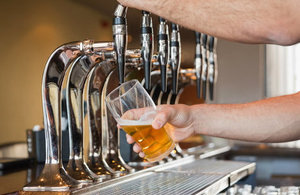 Pubs, clubs, bars and other licensed premises could be allowed to stay open and sell alcohol on the premises later to celebrate the Royal Wedding of Prince Harry and Meghan Markle in May under plans announced by the Home Secretary today.

The government has launched a public consultation on plans to extend licensing hours on the nights of Friday 18 and Saturday 19 May until 1am the following morning, to give everyone the chance to celebrate the occasion.

“The Royal Wedding will be a time of national celebration, and we want everyone to be able to make the most of such an historic occasion.

I hope that this relaxation of the licensing hours will allow people to extend their festivities and come together to mark what will be a very special moment for the country.”

Licensing hours orders have previously been made for occasions of national significance including the Queen’s 90th birthday, the wedding of Prince William and Kate Middleton in 2011, and the World Cup in 2014.

This is great news for pubs and pub-goers and shows the government has listened to our calls to put pubs at the heart of the Royal Wedding celebrations.

Visitors see the Great British pub as a cultural icon, almost as much as the Royal Family. Extended hours would give a £10million boost to the trade and make the most of the expected increase in tourism.

Diana Ali’s brush with fame on the BBC