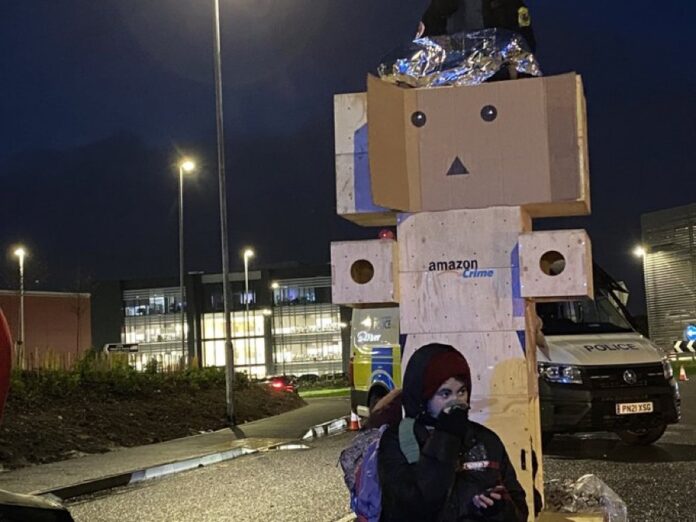 Sunbank Lane in Altrincham is closed from Wilmslow Road to Ridge Avenue.

The protest which started at around 5.00am coincides with Black Friday with the group holding Amazon responsible for the damage that they do to the people and the planet

Extinction Rebellion has blocked a total of 15 Amazon fulfilment centres in the UK, Germany and the Netherlands on Black Friday, the major global discount day. In the UK, people from all across the country are taking part, with 13 blockades in Doncaster, Darlington, Newcastle, Manchester, Peterborough, Derby, Coventry, Rugeley, Dartford, Bristol, Tilbury, Milton Keynes and Dunfermline.

“The action is taking place on Black Friday in order to confront the exploitative and environmentally destructive business practices of one of the world’s largest companies. Amazon is known for a long list of widely recognised “crimes” – from tax avoidance to the exploitation of workers, to rampant wastefulness and ecological destruction – while making its founder and largest shareholder Jeff Bezos one of the richest men on earth. The action aims to expose Amazon’s crimes, while holding it up as an example of the wider economic system, which is designed to keep us hooked on buying things we don’t need, at a price the planet cannot afford.”

“At Amazon, we take our responsibilities very seriously. That includes our commitment to be net zero carbon by 2040 – 10 years ahead of the Paris Agreement – providing excellent pay and benefits in a safe and modern work environment, and supporting the tens of thousands of British small businesses who sell on our store. We know there is always more to do, and we’ll continue to invent and invest on behalf of our employees, customers, small businesses and communities in the UK. We’re proud to have invested £32bn in the UK since 2010, creating 10,000 new permanent jobs across the country this year alone, and generating a total UK tax contribution of £1.55bn in 2020.”

We have a large network of sites across the UK and are working to minimise any potential disruption to customers.

Together with the police, we are working on site to ensure the safety of our employees and those protesting.

Manchester children given the gift of reading this Christmas