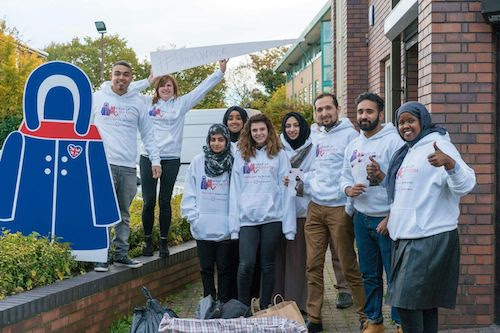 Human Appeal, a British Muslim faith-based charity, are announcing today the launch of their winter Wrap Up Manchester Campaign for the second year.

Following on from last year’s success Human Appeal will also be running campaigns in Glasgow, Birmingham and be the charity sponsor of Wrap Up London. Across all four cities Human Appeal are aiming to collect and donate at least 21,00 coats to the rough sleepers of these cities. Wrap Up Manchester, Wrap Up London, Wrap Up Glasgow and Wrap Up Birmingham campaigns will start on the 13th November and run until 24th November.

In addition to providing warmth to homeless people, Human Appeal’s Wrap Up Campaign will provide coats to charities who help the elderly in crisis, children in poverty and refugees.

This campaign will be Wrap Up Manchester’s second year and Wrap Up London’s seventh year, but the first year of the project in Glasgow and Birmingham. Last year, when Human Appeal launched Wrap Up Manchester they aimed to collect 700 coats for vulnerable people in Manchester over the winter, instead 1,500 items were received.

Supported by Network Rail, Human Appeal’s Wrap Up Campaign will use Manchester Picadilly station as a coat donation site on November 13th, 14th and 15th, and SafeStore; using their self-storage centres across Manchester, Glasgow and Birmingham as donation sites throughout the collection period.

“The winter months can be unforgiving for those sleeping rough or unable to afford a winter coat. We, in Human Appeal, want to not only offer a hand to those in desperate need of humanitarian aid, but to wrap an arm around those in desperate need of warmth. We aim to help people in need all across the world regardless of their race or religion or gender or location. Whether it’s someone in need in Mosul or Manchester, Human Appeal aims to help in every humanitarian crisis.”

“The numbers of rough sleepers in the UK has risen by 133% over 5 years[1]. In the harsh winter months, Human Appeal empower all communities to come together through Wrap Up Manchester to help those most in need. Warm someone’s body with a coat and warm their heart by letting them know you care.”