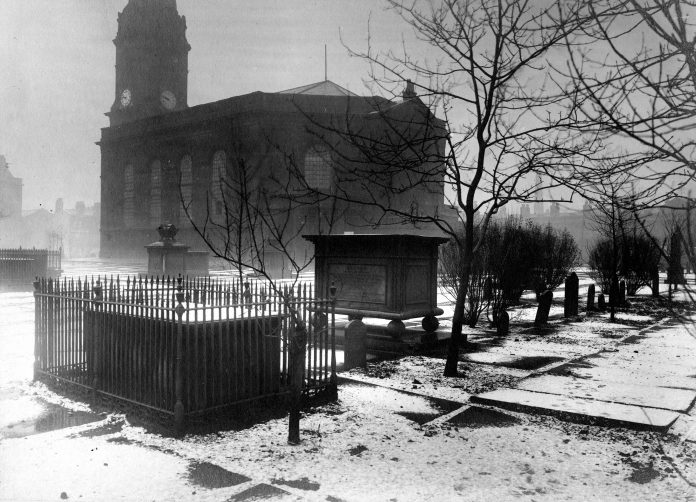 Visitors to All Saints Park are set to learn about the 16,000 bodies buried underfoot from when it was a Victorian cemetery.

As part of Encountering Corpses III (December 8-9), a moving sound installation and artwork featuring the names of the dead will mark the final resting place of these 19th century Mancunians.

The website will also show results of radar scanning of the park undertaken by Dr Ian Drew from the University’s School of Science and Environment.

Encountering Corpses is a two-day research symposium examining the many ways we increasingly interact with the material remains of the dead in contemporary society.

Talks from academics across the country will tackle subjects such as the theory of the dead body, biomedicine, the digital dead body, celebrity corpses and how we encounter death on screen.

The second day will feature an afternoon of ‘encountering the dead’ in All Saints Park, where academics and artists will talk about their experiences of interacting with the former churchyard.

An online exhibition will also detail the history of the park as a burial ground, including new writing from the Manchester Centre for Public History and Heritage at Manchester Metropolitan University and historic images of the park and adjoining church.

Michala Hulme, Lecturer in History, who has investigated the site and studied the burial records of those interred, said: “I am extremely excited to be part of Encountering Corpses III. As a historian that specialises in the mortality, my role has been to research the history of All Saints Burial Ground and its significance within the local community of Oxford Road.”

The burial ground opened in April 1820 to cater for the parishioners of the then newly built All Saints Church, just off Oxford Road.

The first interment was twenty-one-year-old Fanny Knowles, who lived on London Road. In the first year burials were slow with only 55 interments, however, by 1851 the number had increased to over 600.

Hulme said: “On 31 March 1856, All Saints Burial Ground was partly closed under direction of the new Burial Acts. The Acts facilitated the appointment of burial boards, which could use money from the rates to establish public cemeteries.

“The Burial Acts also permitted the closing down of local burial grounds and churchyards, and the promotion of municipal cemeteries as a preferred method to bury the dead.

“By the end of the nineteenth century the burial ground was in a state of disrepair and neglect with sunken graves, broken headstones, flooding and debris from Oxford Road scattered across the ground.

“At the start of the following century, calls were made to the council to find an alternate use for the burial ground. Seen as a valuable open space in a built-up city, it was proposed that it should be converted into a children’s park.

“After 25 years of negotiations, finally, on 27 May 1935, the All Saints playground officially opened. It was described as one of the ‘brightest places in Manchester, with 30,000 children enjoying the park in the first six weeks’. The park was later transformed into a garden and now forms part of Manchester Metropolitan University’s campus.”