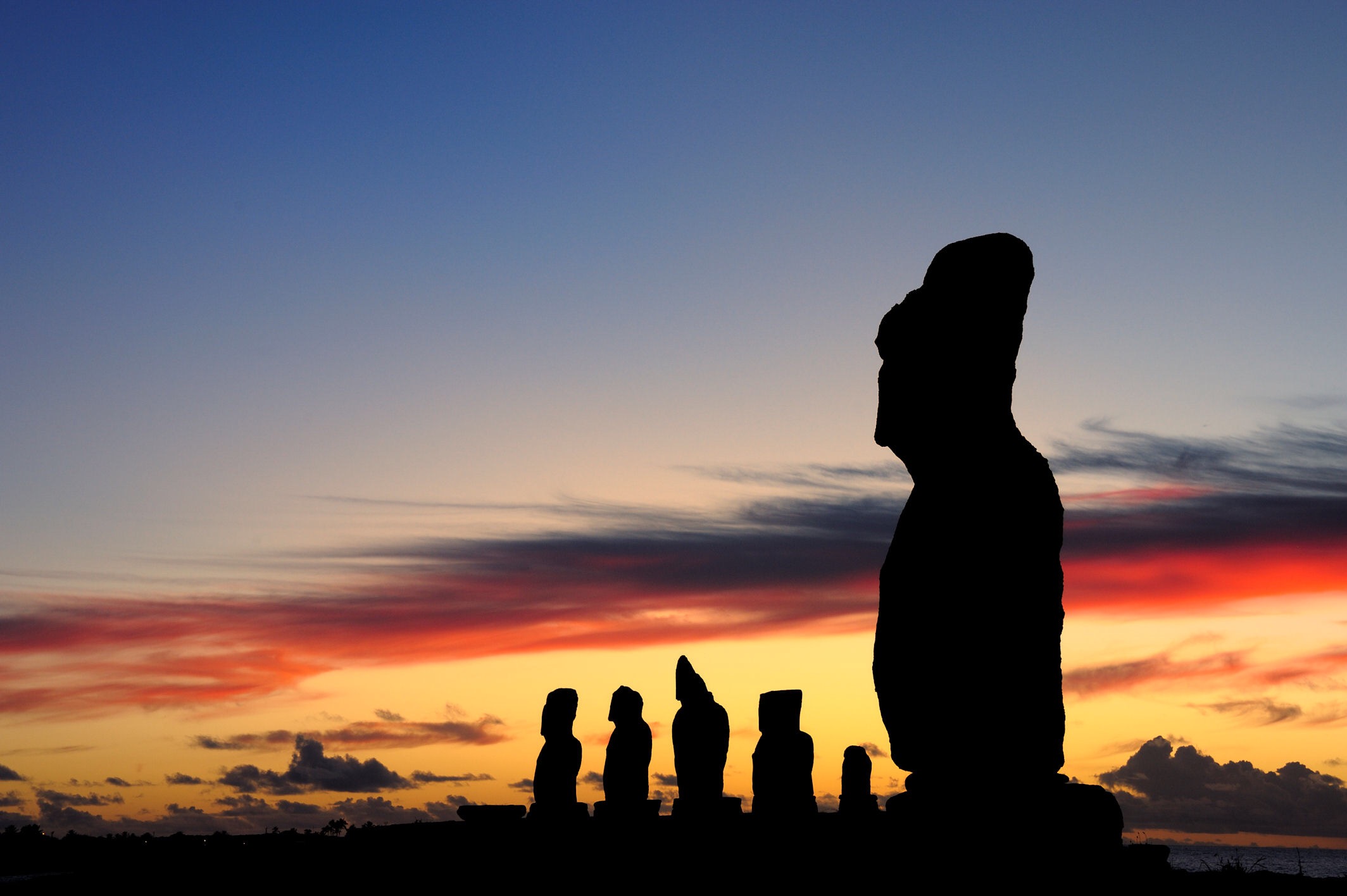 On Easter Sunday 1722, the Dutch navigator Jacob Roggeveen landed on Easter Island and a stone age culture that had lasted for six hundred years was propelled into the modern world. Now an exhibition at Manchester Museum aims to shed light on the society and culture of the island, famous for its stone statutes and maybe teach the West some lessons about our own prehistoric past.

Curator Bryan Sitch makes sure that we refer to the island as Rapu Nai, one of the most isolated places in the world that sits 2,500 miles of the coast of Chile in the Pacific Ocean.

It was thought that its inhabitants arrived from the Americas, a claim popularised by the Norwegian explorer Thor Heyerdahl in the 1950’s whose excavations indicated that some ancient stone carvings on the Island were similar to ancient traditions in Peru. The debate continues, but now scientists believe that their likely origin was from South East Asia as part of the general migration of Polynesian people’s hopping from island to island by canoe.

It is though the statues which the visitor to the exhibition cannot ignore. Greeted in the entrance hall by the Basalt Moai Hava is one of two moai that were taken from the island at the time of the HMS Topaze expedition of 1868. A gift to Queen Victoria taken from the island in 1878, a monumental carving of the head and torso of a man, almost twice life-size, and on loan from the British museum.

Excavations being recently carried out on Rapu Nai by Professor Colin Richards from the University of Manchester is shedding new light on these statues and the relationship of the islanders with the volcanic rock that is abundant on the islands.

The team have recently excavated a stone quarry at Puna Pau where headdress stones or topknots for the stone statues were carved. There, they found evidence of eyes being carved into the Rock. Brian tells that it is as if the Rapanui were showing that this is not just an inert material to be carved, it is a living entity, exposure to which was considered dangerous or tapu (the origin of our word taboo) unless appropriate rituals were observed.

The many statues that were found, seemingly abandoned across the island were, Bryan says, roadside markers giving warning of the tapu, almost like modern day radiation, where exposing yourself to danger was to be avoided and, as he surmises, the Rapanui could have been advised to only enter these places after undergoing some form of preparation.

Volcanic craters had special significance to the Rapanui, seen  as a passageway between the realm of the everyday (Ao) and the realm of shadows and spirits (Po). It was, says Bryan no accident that the Rapanui selected stone from extinct volcanoes at Rano Raraku and Puna Pau to make their statues and topknots.

“The concept of the island as a living being may help to explain aspects of the carving of the moai. Rather than extract blocks of rough stone to be worked at the destination  the Rapanui carved the statues or moai complete in the quarry. A number of stone adzes or toki can be seen in the corner display unit. The narrow strip or keel of stone joining the statue to the bedrock was then chipped away to release the statue. This is rather like severing the umbilical of a new-born baby. The Rapanui may have thought the rock was literally giving birth to the statue, which was either alive or had the capacity or agency to be alive. “

The centre piece though of the gallery are the two 10 feet tall replicas of moai complete with their pukao or topknots, one of them with its eyes inserted. The replica statues were sculpted by Chris Dean of Freeform Studios Ltd with the help of Peter Spinks of Creative Models. It appears that eyes were only inserted into the statues’ eye-sockets during ceremonies or festivals. 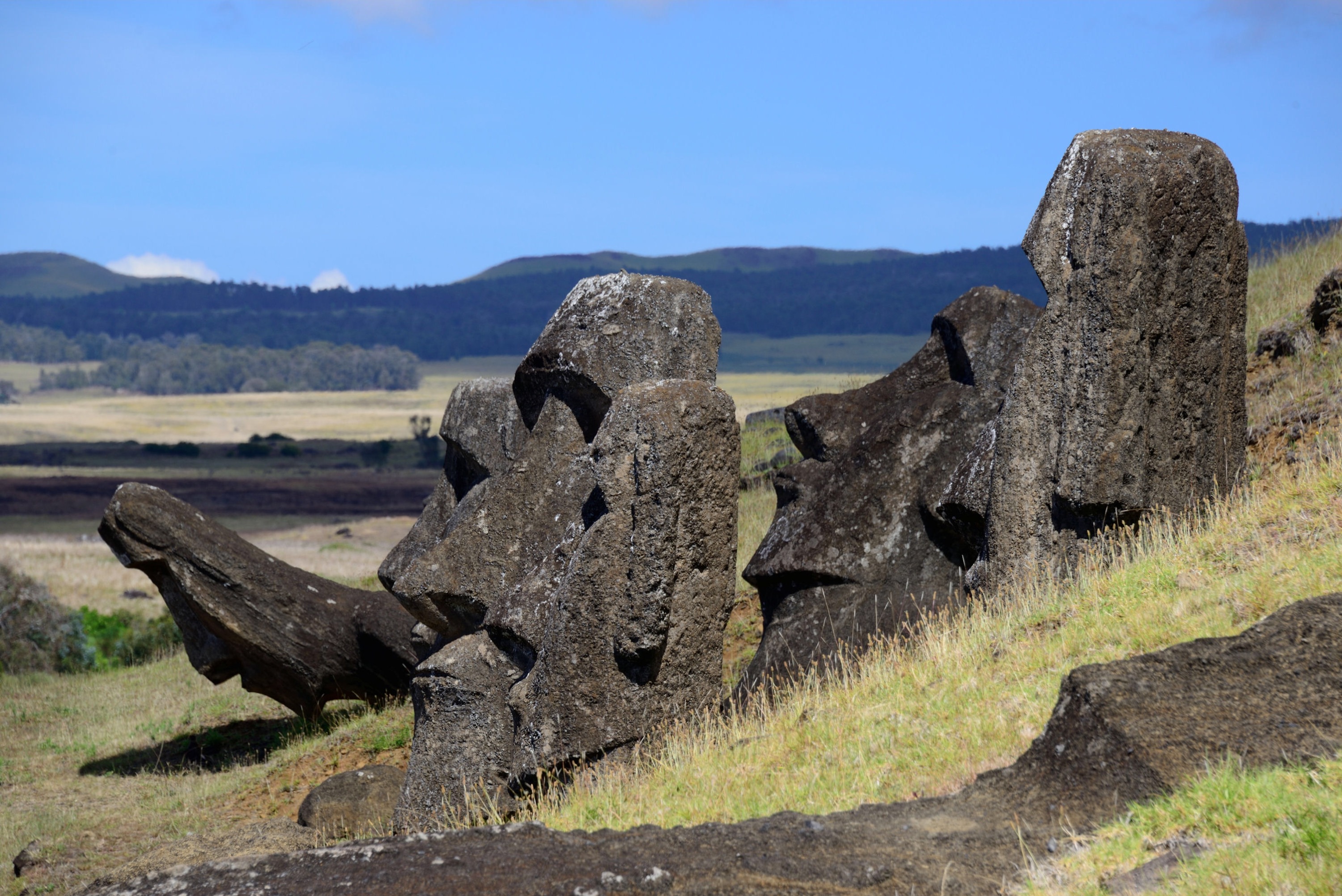 Much has been written about the Rapanui people. Their first encounters with Europeans would have shaken their belief system to the floor.They had almost certainly lost the seafaring memories of their ancestors. The Rapanui chopped down all their trees or introduced deliberately or inadvertently rats which gnawed the seeds of nuts of the palm trees and ate seedlings and thereby prevented the palm forest regenerating, thus cutting off their supplies for making canoes.

They had been isolated in a Stone Age culture  for maybe up to eight hundred years, their numbers fell from over three thousand to one hundred and eleven in the space of a century, bartering their trinkets and carvings for metal and cloths and being ravaged by disease.

A famous illustration by de Vancy from the time of the French visit in 1778 shows the Comte de La Pérouse measuring a standing moai whilst the Rapanui are stealing his hat. Another member of the ship’s crew is being distracted by an attractive Rapanui woman unaware that other Rapanui are picking his pockets.

There is also evidence that the onset of Europeans saw bitter warfare, statues were toppled and weapons were made out of the obsidian stone, displayed in the exhibition.

It was only the intervention of Chile, taking over the islands in the late nineteenth century that saved the culture.

Today the islands are a magnet for tourism and it is that which sustains the economy, a visit featuring on many a travel bucket list.

There is, Bryan says, much still to explore. The quarries are still covered in debris, a consequence of the Rapanai excavating from the middle down, and many of the secrets of the statues could still be hidden.

This is a unique opportunity to study a Stone Age culture which lasted until three hundred years ago and we could learn the lessons of our pre history.

Making Monuments on Rapa Nui
The Statues from Easter Island

Thunderbards bring their greatest hits to the Lowry

University of Manchester – a commemoration of the First World War