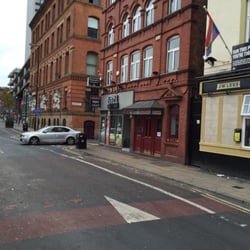 Police have arrested an eighteen year old man on suspicion of rape following an incident happened in the early hours of Sunday morning in a property on Sackville Street in Manchester City Centre.

The group continued walking to the property and once inside the man raped her at around 2am.

Enquiries are ongoing and detectives are appealing to anyone with information to come forward.