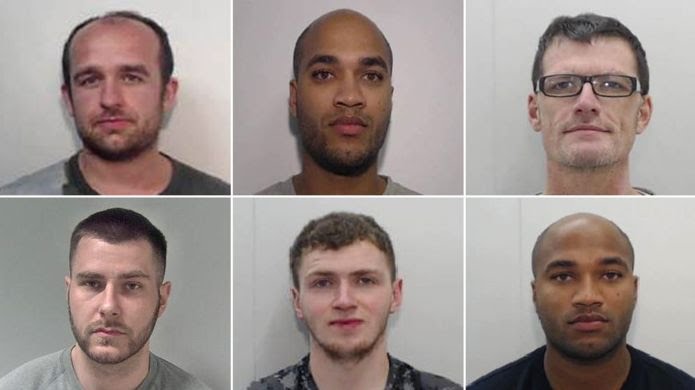 Eight members of a Salford organised crime group have been jailed for their roles in separate plots to shoot two men in cold blood as part of a feud with a rival gang.

The first incident took place outside a carwash on Bolton Road in Ashton-in-Makerfield on 30 March 2015 and saw an unknown gunman fire across a busy main road during rush hour in an attempt to shoot a 31-year-old man.

Upon hearing the shots being fired, the man was able to flee into the office of the carwash but not before he was hit three times in the abdomen, wrist and groin.

Following meticulous enquiries, the investigation team was able to confirm that John Kent had driven by the location in his Peugeot van repeatedly before the shooting took place, performing surveillance on the victim.

He then met with the gunman and Jacob Harrison who had travelled to the area together in a stolen Seat Ibiza. Kent and the occupants of the Ibiza then drove to the scene in convoy.

After the shooting they then all fled the scene together.

During a nine week trial, Kent pleaded innocence and unsuccessfully tried to convince the jury that he – a prominent associate of an organised crime group – had been forced out of his van and left walking the streets. But he called no one for help despite having his phone in his pocket.

Fast forward to October 2015 and members of the group were reeling from the murder of 55-year-old Paul Massey – a man considered a mentor and friend to the leader of the OCG.

Intent on striking a blow in retaliation, Aldaire Warmington authorised the shooting of Chris Hickey – a man who was not a member of the rival group but was close friends with its leader having known him since childhood.

Thinking that it might be his sister arriving home from swimming, 7-year-old Christian Hickey Jnr ran to the window and told his mum, Jayne, that there was a postman at the door.

Jayne, 30, answered the door and was confronted by Thomasson who asked if her husband was home. As she closed the door slightly and turned to shout her husband, the second man emerged from behind the van and shot through the door a number of times, hitting Jayne and little Christian in the legs.

The pair suffered serious life changing injuries and have undergone multiple surgeries since.

Thomasson and the gunman fled the scene in a black Audi S3 which was driven to Edinburgh by Christopher Hall the following day so that it could be disposed of.

Telephony evidence confirmed that James Coward, Dominic Walton, Lincoln Warmington and an unidentified person in Edinburgh had been in contact with each other, seemingly making arrangements for the disposal of the car.

This gun was later recovered by GMP’s Serious Organised Crime Group on 15 December 2015 in the possession of Christopher Hall and Aldaire Warmington in Mobberley, Cheshire.

Both Warmington and Hall are currently serving prison sentences in connection with the recovery however during the latest trial, Carne Thomasson admitted to being actively involved in the movement of the gun.

Although the gunman for both incidents remains unidentified, subsequent enquiries by the investigation team confirmed that the same gun was used in each shooting.

Detective Chief Inspector Carl Jones, of GMP’s Major Incident Team and the Senior Investigating Officer for Operation Leopard, said: “Today we have seen eight members of a Salford based organised crime group sentenced for their roles in two plots to shoot men in cold blood as part of a feud with another OCG.

“Although none of them pulled the trigger, each man played their respective parts in the conspiracies and most of them considered themselves untouchable, believing that they could lie their way out of trouble.

“Thankfully the jury saw through their lies and they deserve to be exactly where they are, facing a lengthy prison sentence.

“To shoot a young boy on his doorstep is absolutely sickening and the thought of getting justice for Christian has been a driving force for the investigation team, whose dedication and meticulous efforts have brought us to where we are today.

“Their work, supported by Salford Council, the Crown Prosecution Service and other partner agencies, has made bringing these dangerous men to justice possible.

“I cannot stress enough how positive a result these convictions are for the people of Salford, whose daily lives will have been impacted by the criminal activities of the notorious organised crime group known as the A-Team.

“I hope the sentences imposed on them will send a clear message that, no matter who you are, if you are involved in organised crime, we will pursue you and do all we can to put a stop to you criminal activities.”