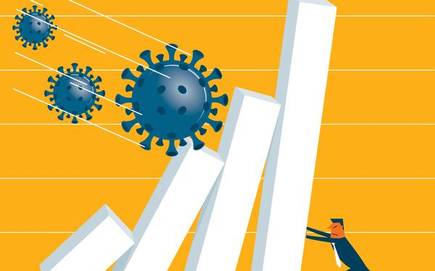 British business activity has contracted in November as a new wave of coronavirus restrictions hammered the huge services industry, but news of possible vaccines have boosted hopes for 2021.

The downturn was driven by the fastest reduction in service sector output since May
amid temporary business closures among leisure and hospitality companies.

In contrast, manufacturing production expanded at a robust pace during November and the rate of growth accelerated since the previous month.

The latest manufacturing PMI survey nonetheless pointed to a sharp lengthening of supplier delivery times amid severe delays at UK ports, alongside a robust degree of stock building as manufacturers sought to accumulate critical inputs before the end of the Brexit transition period on 31st December 2020.

Adjusted for seasonal influences, the IHS Markit / CIPS Flash UK Composite Output Index – which is based on approximately 85% of usual monthly replies – dropped from 52.1 in October to 47.4 in November and pointed to the sharpest downturn in overall business activity since May.

The underperformance of the service economy (45.8) relative to the manufacturing sector (56.3) was the widest in almost 25 years of data collection, reflecting the severe
impact on business activity from a second lockdown in England and tightened COVID-19 restrictions across the rest of the UK.

Manufacturing growth was mainly linked to a sustained recovery in production volumes after stoppages at the start of the pandemic.

Survey respondents also commented on rising demand from export markets, especially in China and the EU. The latter was often linked to pre-purchasing due to Brexit uncertainty
as European customers sought delivery of orders before the end of the transition period.

Total new work received by UK private sector firms decreased for the second month running in November. Another fall in new business across the service economy more than offset a solid improvement in order books in the manufacturing sector.

Backlogs of work decreased at the fastest pace since June amid shrinking demand and a lack of pressure on business capacity.

November data indicated that job shedding accelerated across the UK private sector, with the rate of decline in staffing numbers the steepest for three months. Lower employment was mainly attributed to redundancy measures, although some service providers also commented on the renewed use of the government furlough scheme during the latest survey period.

Looking ahead, private sector companies remain optimistic that business activity will increase during the next 12 months. The degree of optimism improved since October and was the strongest since March 2015.

While some firms simply commented on an expected rebound from low levels of activity in November, there were also widespread reports that hopes of an end to COVID-19
restrictions and positive vaccine news had spurred business confidence about the year ahead.

“A double-dip is indicated by the November survey data, with lockdown measures once again causing business activity to collapse across large swathes of the economy. As expected, hospitality businesses have been the hardest hit, with hotels, bars, restaurants and other consumer facing service providers reporting the steepest downturns.

“Some comfort comes from the data suggesting that the impact of the lockdown has not been as severe as in the spring, and manufacturing has also received a significant
boost from inventory building and a surge in exports ahead of the UK’s departure from the EU at the end of the year,providing a fillip for many companies. However, while the lockdown will be temporary, so too will this pre-Brexit boost.

“The health of the economy in the new year therefore remains highly uncertain, but it is very encouraging to see the survey’s gauge of business optimism surge higher in November.Improved prospects for the year ahead are thanks mainly to the news of successful vaccine trials, which at last provides a light at the end of the tunnel for many businesses.”

North West economic optimism edges ahead, according to Lloyds Bank