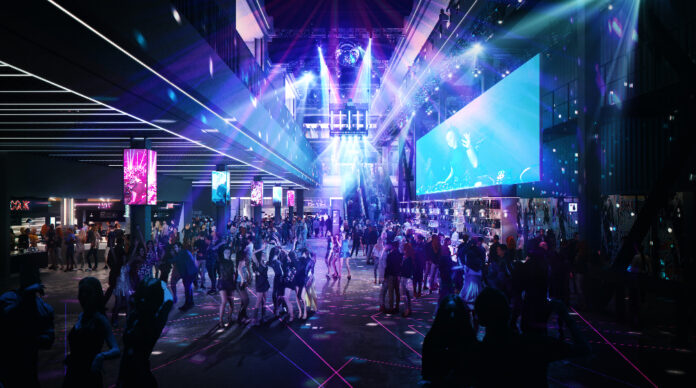 A bullish OVG chief executive Tim Leiweke faced an audience of the press for the first time today confident that his East Manchester £165m Arena project would place the City region at the forefront of the U.K. entertainment industry
For those not aware of what is taking shape in East Manchester next to the Etihad stadium Co-op Live, the new 23,500-capacity and £365m arena in Manchester, is promising to bring over 100 of the best global acts to the city every year and deliver a transformative live entertainment experience for artists and fans alike bringing they say 1.3 million visitors annually into the city’s already thriving calendar
It will be the UK’s first all-electric arena and the most sustainable venue in Europe, and promises to  achieve net zero carbon by 2038
The people behind it,Oak View Group (OVG)  promise to be a positive disruption in the business of live entertainment and sport.
They are partnering with City Football Group, the company that owns Manchester City in a project that is injecting £350m of private investment into the North West they say and wil be one of the world’s premier music and entertainment venues, rivalling New York’s Madison Square Garden, The Forum in LA and The O2 in London and is due to open in 2023.
Tim was bullish about competing against what people will feel will be his major competitorabout his major competitor, theManchester AO arena whose design he said belonged to the past,was constrained by its location and whose expansion plans had yet to come to any fruition

Co-op Live’s success was not dependent on its nearest rival’s failure he told me .

“I would not want to compete against us and if I were them I would lose sleep over us but I do not wish them anything else but the best,” “Co-op Live will be one of the top five arenas in the world for music.”

The build had defied COVID and inflation,he told us,the steel coming from the short distance of Bolton and the concrete from Northern Ireland.Indeed Leiweke said that without intensive forward planning, the arena cost copuld now be approaching £500m
And to suggestions of lack of trickle down economics in East Manchester,there is a goal of employing many from the immediate environs,indeed they were looking for people who could walk to the venue to take on.
There are other sustainable goals,encouraging people to use public transport or walk to the venue with plans for a spruced up and well lit walkway from the City Centre and for the food and drink offering,between 80 to 100 per cent being locally sourced 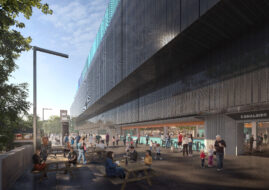 While faced with questions about the partnership with Manchester City and human rights issues in Dubai,T said for one he had never been to Dubai and two they were the best partners he had ever had the pleasure to work with.
And then there is Harry Styles,who is also backing the scheme and was given his own special tour of the site ahead of his sell out dates at the Etihad Old Trafford.

So what else is its selling points . The purpose-built music venue will have a ‘black box’ bowl design that brings fans closer to the stage than ever before and a low ceiling height to improve acoustics and create intimacy. The black box design also offers a unique black canvas for artists and its large standing space will be able to house up to 7,500 fans.

Sustainability is at the core of Co-op Live’s design and its future operations. The building will be fully powered by electricity, with a solar powered roof, rainwater harvesting, heat source technologies, and LED lighting.

Meanwhile The construction project, the single-largest in the city, is generating a significant boost to the regional economy and over the next 20 years will create an additional impact of £1.5bn in the localarea.

The construction phase is supporting thousands of jobs, including apprenticeships for local
people, and the venue will support a further 1,000 roles once open.

With the first acts to be announced this September, let’s roll on 2023 and maybe Harry Styles will be the opening act on the stage