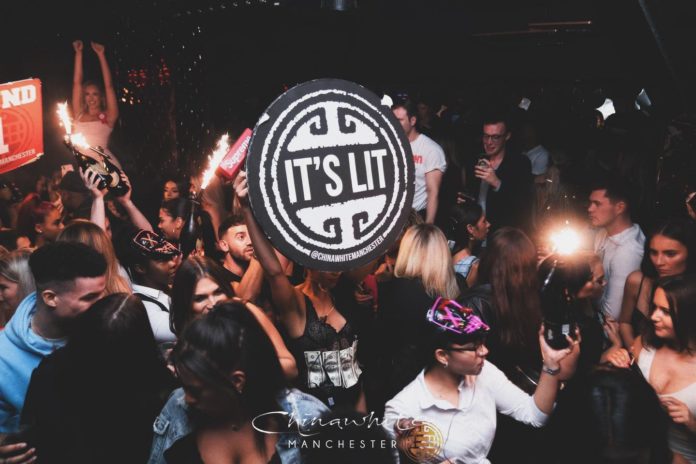 About Manchester recently spoke to James Spallone, Managing Director of Chinawhite about the move to Manchester, famous faces that have visited the venue and the future.

If a person was looking to visit Chinawhite Manchester, how would you describe the experience?

Chinawhite Manchester is a unique and vibrant night-club located in the very heart of the city.

How has the process of opening Chinawhite in Manchester been?

Our location here was a bit of a “Happy accident”. We’d been researching Manchester as a possible location and had really enjoyed the experience. We loved the city and the people we met, so agreed to make it our first choice at dinner in the centre that night.

As we were eating, a friend called me to let us know there was a site available on Deansgate. We went to view it straight after dinner and immediately saw the potential of the venue. It was in the old Milton Club site in Milton House and I fell in love with the building and entrance straight away. We agreed the deal the next day and the paperwork was done very quickly.

What have you witnessed in the move to Manchester that has prompted you to look at further expansion?

We’ve always aimed to open a few sites nationally and Manchester has been such a pleasant experience, with great results, that we are now looking at Newcastle and some other cities in the North of England

We’ve already found a site in Newcastle but it will be a different offer there to what we’ve created in Manchester. We also want to do something else in Manchester and are currently looking at sites.

What difference have you seen between the nightlife market in London and Manchester?

London in the last 10 years has seen clubs which have been held to ransom by promoters and we wanted to move away from this in Manchester. We wanted to build something organically without the balance of power being held by promoters.

We knew that what we would build would work based on previous experience and we’ve all worked really hard to get people through the door and provide an experience they will want to return to. We knew we had built a great product and it was then getting the message out to everyone. The people in Manchester have been so welcoming and friendly, making it a pleasure to operate here.

What are your priorities when trying to create the perfect nightlife experience?

For me, it’s about creating a place where everyone feels comfortable letting their hair down and having fun.

Who are some of the famous faces that have visited Chinawhite?

Drake hired out Chinawhite on his recent tour after an arena gig. It was last minute, but we couldn’t really say no.

We have such a broad cross-section of clientele and we are lucky enough to also have regular visits from some very well know faces from the sport and entertainment industries.  We always try to create an environment where everybody feels comfortable and I think that is part of our success.

What challenges have you faced opening in Manchester?

What we wanted to do was build a club for Manchester. We had no desire to be a London club in Manchester we wanted to be a Manchester space. We knew we were building a great product and the aim was to create organic growth.

We’ve worked closely with local people that gave us insights about Manchester’s nightlife and we’ve quickly built a strong relationship with our clients and reached a great footfall. With all the shareholders, we all knew that what we would build would work and we really worked hard on it and hoped people would want to come. We had a well-established brand in London however we were all very aware that Manchester wasn’t London so adapted our business model to fit the city.

What are your views more generally about Manchester’s economy?

Manchester is a vibrant and fast-moving city which seems to be developing very quickly. We can see prominent London brands such as The Ivy or Barry’s Bootcamp coming to Manchester, which proves how wonderfully the city is growing. You just have to look at the city skyline to realise how fast Manchester is growing.

Have you got any special events coming up in Manchester?

We will be having our 1st Birthday Party on the 07/11. We have loads of things going on for Christmas and have just released our Christmas packages which can be found on our social media channels.