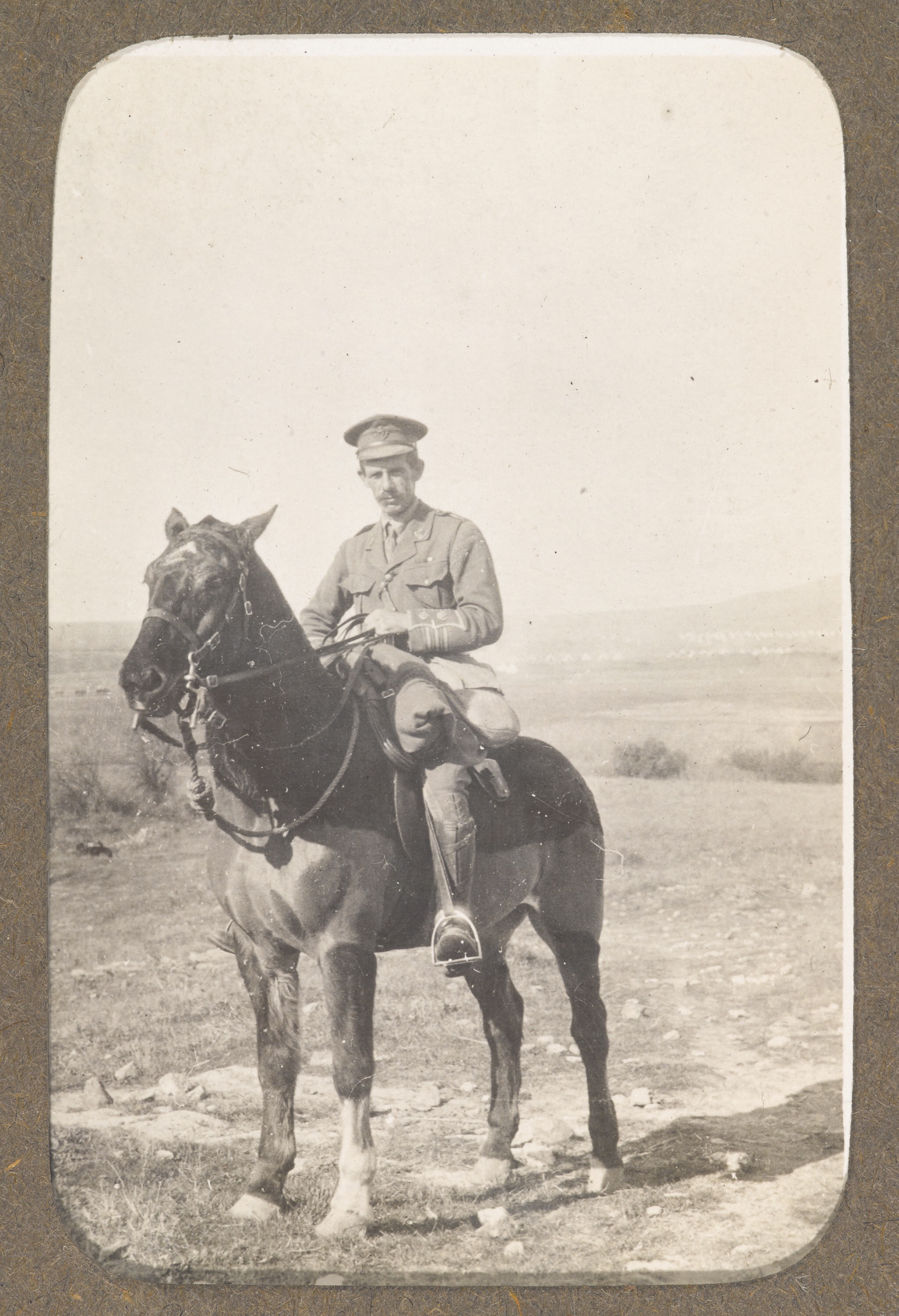 First World War diaries belonging to Lieutenant-Colonel Henry Jourdain of The Connaught Rangers have been made available online for the first time, exactly one hundred years after he was left as the sole-surviving officer in his battalion headquarters while fighting in modern-day Turkey.

Thousands of miles from the battlefields in Flanders, British forces set out to attack Constantinople (now Istanbul), via the Dardanelles strait, in an attempt to relieve pressure on Britain’s ally, Russia. They never reached their destination. At Gallipoli, troops were met with minefields, fortifications and Turkish gun emplacements. After nearly a year of fruitless fighting, and with over a quarter of a million casualties, Allied forces withdrew.
On 22 August 1915 during an attack on an enemy placement simply termed ‘Hill 60’, the Connaughts were forced to retreat after suffering horrific losses under enemy fire. 46 men were killed, 157 wounded and a further 47 men were missing-in-action after the bloody battle. With three officers killed and nine injured, Jourdain was the only officer to return to his battalion headquarters and the deaths of his colleagues deeply affected him – as he recounts in his diary:
“I came through the gap where we had issued forth to the attack the previous day. My thoughts went back to the many brave fellows who had gone forth just over 24 hours ago and who would never return. All my staff had gone, and I was the sole survivor of the head quarters. It was very sad.”

Jourdain’s diaries record the conditions soldiers lived with and the horrors they saw, as well as recalling battlefield tactics. On arriving at the peninsula in August 1915, Jourdain witnessed men being shot, wounded and even being ‘blown to pieces’ by shells, setting the tone for the fighting to follow.

Jourdain’s diaries, detailing the catastrophic campaign, are being published on the National Army Museum’s commemorative online portal, First World War in Focus as part of the Museum’s Soldiers’ Stories series.

Under ‘deafening’ heavy fire for days on end and in blistering heat, Lieutenant-Colonel Jourdain and his troops dug in. ‘Suffering from a shortage of water’ and living on ‘bully beef, jam and biscuits for weeks’, conditions were tough for all involved. While it was ‘hot and sultry’ during the day, at night ‘the cold was intense’, and soldiers’ khakis were not enough to keep the men warm. 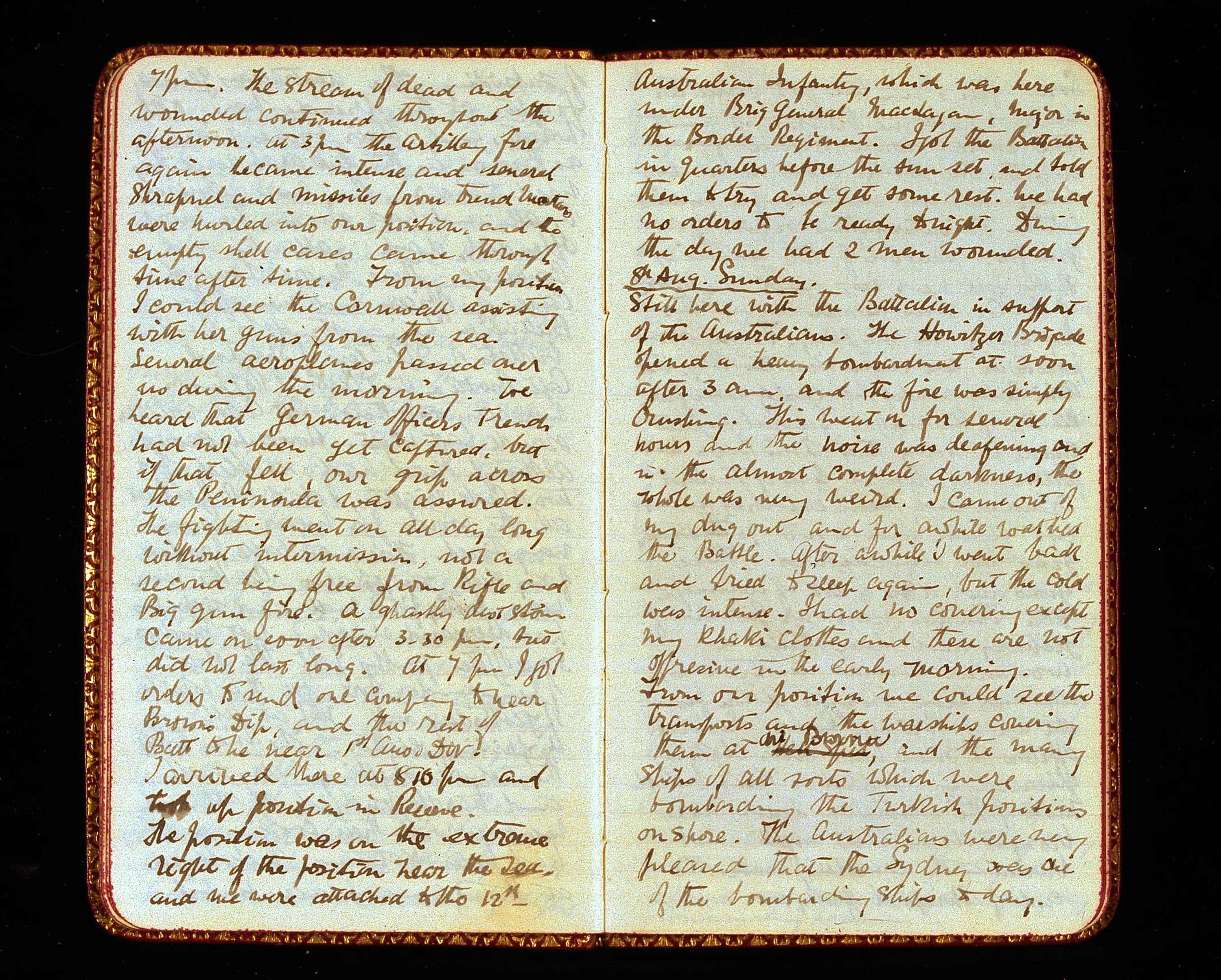 Casualties from heat and disease overwelmed inadequate medical facilities. In the trenches there were “wounded and dying men lying all over the place”. Jourdain’s best efforts to help went in vain, with his distress coming across clearly in the words of his diary.

Henry Francis Newdigate Jourdain (1872-1968) was born to parents Reverend Francis Jourdain, the vicar of Ashbourne in Derbyshire, and his wife Emily O’Farrell from Galway in Ireland, in Ashton-under-Lyne.

He was christened in Derwent and schooled at Queen Elizabeth Grammar School in Ashbourne (both in Derbyshire) before attending the Royal Military College in Sandhurst. Jourdain, who was a keen golfer and hockey player, fought in the Boer War (1899-1902) before joining the military efforts at Gallipoli, where his diaries show that even as a professional soldier he was shocked by the things he saw.

Throughout August 1915, Jourdain’s battalion, the 5th Connaughts, worked with Anzac forces, with Jourdain noting that “the Australians [are] admired by all, and have shown the most splendid dash and courage”. Despite the strength of the Australian and other Anzac forces, Allied efforts were largely unsuccessful.
At the end of September, Jourdain’s battalion was transferred to the Macedonian front. Just two months later, the high command decided to withdraw the entire Allied army. By 9 January 1916, the Allies had suffered 252,000 casualties out of a force of nearly 500,000 in one of the most disastrous campaigns in the First World War.
After Gallipoli, Jourdain went on to serve in Salonika, Palestine and on the Western Front and was appointed a Companion of the Most Distinguished Order of St Michael and St George for his services, an order of chilvalry given to those who hold high office or who render extraordinary service in a foreign country.
Later in life, Jourdain was a noted medal collector and military historian, writing a book about the Connaughts (Ranging Memories) and editing their regimental journal ‘The Ranger’. For his historical contributions, Jourdain was awarded the Great Gold Medal of the Institut Historique de France in 1934 and was created a Chevalier of the French Order of the Academic Palms. He died in 1968 at the age of 96.
Dr. Peter Johnston, Collections Content Team Leader at the National Army Museum says: “The National Army Museum’s Soldiers Stories series allows us to better understand the First World War from the perspective of those who endured it. Jourdain’s diaries provide rare and unique insights into life in the trenches during the disastrous Gallipoli campaign. Jourdain’s poignant memories of battle show how thousands of First World War soldiers might have felt: their triumphs, their struggles and their sorrows. His experiences not only give us insight into battle tactics, but his emotive accounts show how difficult life on the battlefield was.”
Such personal accounts are being unveiled each month in the Soldiers’ Stories series. They piece together the development of the war from the point of view of those directly involved – one hundred years from the time that they describe. An interactive global map also features on the portal, which geotags all the major events of the war, as well as a timeline to help users piece together the development of the conflict and a host of learning tools. The website is a unique resource that will help commit the events of one hundred years ago to the country’s national memory in one central place.